0shares
MUCH ADO ABOUT A MUTE SWAN: PART 17

“To Have the Love of a Wild Heart”

There’s nothing like having a soul-connection with a wild animal. Unlike domestic animals who automatically subserve to humans, wild animals do anything but subserve. When I am sitting on the dock, and Prince gets three inches from my face and stares into my eyes without breaking his gaze, I can see that he’s telling me we’re equals. He’s there because he wants to be there. He has chosen to spend time with me.

It’s true that I am technically his feeder, but most swans don’t have such bonds to the people who feed them. I have heard that they tolerate them– at best. And at worst, they play dominance games and sometimes raise their wings in an attack stance. And that’s how they treat their feeders. The swan experts that I have spoken to have told me that wild swans, or even domesticated swans, normally do not care much for humans, even if those humans feed them.

When I went to feed Prince today, I felt that he might be a little wary of me, given that he was almost attacked with a gun the night before. But, he saw me from way off, my long auburn hair blowing in the wind, and started crossing the lake.

I always wonder how he recognizes me versus other humans. Does he hone in on my head of curls, or has he picked up on my specific walk? It’s always a mystery how he recognizes me coming even when he’s all the way across the lake. Unlike him, I change my look every single day. Sometimes it’s sweatpants, sometimes jeans, and sometimes skirts. So, he must have to pick up on something inherent to me, such as my hair or my walk. Or, if he’s a typical guy, he may have picked up on how I’m built, and when he sees me, he says to himself, “I would know that tail anywhere!”

But, I think Prince must have a fashion sense, because occasionally if he doesn’t like the shoes I am wearing he’ll lightly peck or pull at them with his beak. The last time that happened I was a real sight for the fashion police. I was wearing these screaming pink argyle socks that came up to my knees, and I paired them with purple flowered muck boots– the kind one wears when cleaning horse stables. Prince took one look at that and gently pulled at the sock and pecked the toe of the boot a few times. But, then, today he didn’t like my old, beat up Nikes. And, I have the picture to prove it! 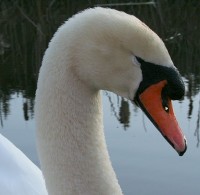 Today was no different than any other day– he did his wing dance, and a few head bobs and bows. He brought me a few sticks for my nest. But, he did do one thing differently. He upped the ante on nesting materials and decided to ferociously attack a huge bunch of dried cat-tails. There was an enormous rustling and plucking sound as he dove his beak into the cat-tails and attempted to rip them out at the root. He didn’t succeed as he would have liked and only had a few meager strands to bring me.

But, I was pleased with the few straw-like strands he gave me. I told him in the ‘baby voice’ that I use with him, “Thank you pretty boy– you such a good boyyy!!” Then he saw I was pleased, and lifted his butt out of the water and gave me a very hearty tail wag and then a few shakes of his head from side to side. Just like a dog, when Prince gets his head too wet, he shakes it a million miles an hour from side to side.

The sun was out today and the thermometer hit 60 degrees. Prince was in a playful mood and did all kinds of poses for the camera. Just like sun, or lack of, effects us humans, I can see that Prince too is effected by the sun and the weather. He’s so much more playful when the air is balmy and the sun is out. And there’s nothing more beautiful then Seattle when the sun shines. 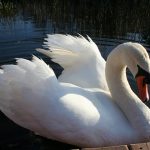 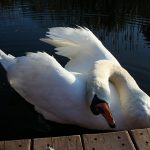 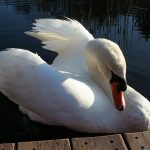 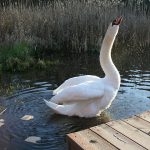 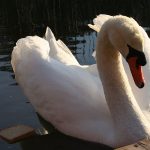 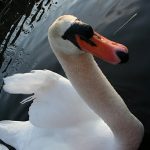 I ended up laying down on the dock and soaking in the rays. I laid on my pale arms and let my head hang slightly over the water. Prince gently approached my face and bowed. He gazed into my eyes deeply, and then slowly squeezed his eyes tightly, and opened them again, just as quickly. And he gazed at me again, as if looking at me for the first time. He sat perfectly still and studied my face as I studied his and looked to see if I could figure out what he was thinking. Then, again, he slowly started closing his eyes as if fighting sleep. The sun danced and reflected on his white wing feathers. Everything was illuminated, but All was perfectly still. His eyes stayed shut for a while, and I saw as he kept squeezing them shut with more effort. Prince looked like a child who was in the process of making a wish– a wish that was as deep as her heart itself– a child who knew somehow that if she squeezed her eyes shut and really thought about her wish, one day, it may come true. Prince opened his eyes and gazed deeply at me again.

Then I knew, Prince was wishing for Love itself.

*All of the photographs in this post were taken today. For any photography buffs, I use a Canon Rebel Digital SLR Camera

with a standard lens on the auto-focus setting. Prince is a tricky subject in that sometimes he moves fast and this is the fastest setting for the Rebel that doesn’t blur. (When I use the fast-action setting the pictures blur). Prince is used to the Canon but hates video cameras and usually protests. I still have yet to get some meaningful video of us together without him protesting, but I will try again this weekend if it’s sunny. The second thing is, Prince doesn’t like men, and all the videographers I know happen to be men. Usually when someone is trying to film me, Prince gets upset and postures angrily the whole time and that doesn’t tell the story. But, I will try, try, try again. I want all you swan fans to see how he interacts with me. It’s truly incredible and you almost have to see it to believe it. My writing doesn’t begin to describe it well.