0 shares
MUCH ADO ABOUT ABOUT A MUTE SWAN: PART 16

“Some Teenagers Attempted to Shoot Prince”

They entered at sunset from my neighbor’s property. My neighbors are very kind and trusting people and they let people access the lake from their land, even though it’s a private lake owned by the homeowner’s association and open only to residents of the community.

Local teenagers from outside the lake community have sometimes taken advantage of my neighbor’s kindness, and more times than not, vandalized property or left beer or soda cans.

But the most harmful case of trespassing occurred just after sunset last night. Some young teenage boys entered the property at sunset with what appeared to be a BB gun. These boys managed to take a few shots at Prince before some homeowners on the lake heard the shots and chased the boys away. No one was able to catch them or get a good look at them since it happened under the cover of darkness and the boys were fast. They disappeared into a nearby, heavily-wooded forest.

Prince hadn’t been hit with a bullet as these weren’t very skillful shooters, and we can Thank God for that. But, he sure was frightened, nonetheless. I’m sure it was very confusing for him to be shot at by the same species who normally cares for him and feeds him.

When I found out about this incident, I was beside myself with anger. I had already lost one swan, and heard the news I couldn’t replace that one swan, and then almost lost the remaining swan with whom I have developed a deep and on-going bond. In a word, I was furious!!!!

No one knows who these boys might have been and but we know they weren’t from the neighborhood. In that case, they could have been from anywhere.

Fortunately, many of the homeowners who have waterfront property are retired or stay-at-home moms and they keep a very close watch on the lake all day long. There are a few others who patrol the neighborhood on foot daily. Thank goodness we have a very good neighborhood watch system in place here.

And there’s something I haven’t mentioned about Prince yet before. He too is his own neighborhood watch, only he doesn’t watch for burglars, or patrol for prowlers, nope, Prince’s specialty is nabbing Canadian Geese. 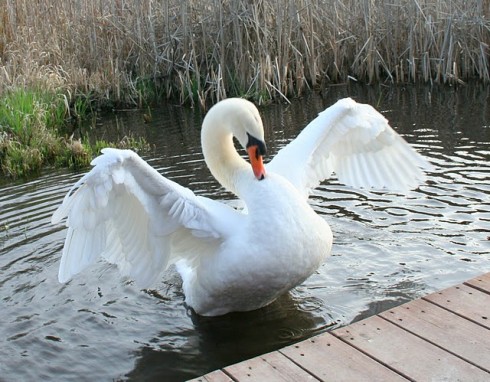 We have a big problem with Canada Geese in Washington State. They take over small and large lakes alike. Their populations are so large, and their droppings are so polluting, that the city has to routinely close Lake Washington beaches in the summers. The waters become toxic Canada Geese poop-dumps and people become ill if they swim or even play at those beaches.

In addition to causing water-bourne illness, these geese are very agressive. My husband and I used to take the kids to a small lake park in Puyallup that had nature trails around the lake. Inevitably large flocks of Canada Geese had taken roost up there, and they would enter the nature trails and attack people. Now, even though I have been chased by Canada Geese, I consider them more of an annoyance than a menace. The worst thing they can do to an adult is peck. But, they could potentially harm small children. 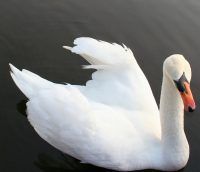 And if a mute swan has established territory, he chases off any Canada Geese who want to enter. Prince patrols our small 11 acres lake and keeps it goose-free and pristine. We don’t have to worry about the lake being polluted by goose droppings in the summers thanks to Prince. And therefore, many families swim in the lake during the summers and have BBQs at the lakeside cabana. It’s quite beautiful.

My neighbor Bill’s main drive to get the swan bill passed was two-fold. Sure, he and his wife love Prince just like the rest of us, but he, along with many other homeowners, is more concerned about keeping Canada Geese OFF the lake. And the only way to do that is to keep a mute swan ON the lake. Bill says that if Prince passes away and we have no swans, the Canada Geese will take over the lake and ruin its pristine state. 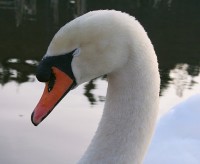 But Prince, in and of himself, is still my first priority. To me, he is much more than a watch-dog for the lake. He is my friend, my companion when I am sad. Sometimes he even makes me laugh with his strange expressions and cocks of his head. Other times he makes me laugh out loud when he takes his huge webbed foot and scratches his head with it. He looks just like a dog with feathers. In fact, Prince may as well be a dog with feathers for how loyal and loving he is.

Prince, we are not giving up on you, buddy.