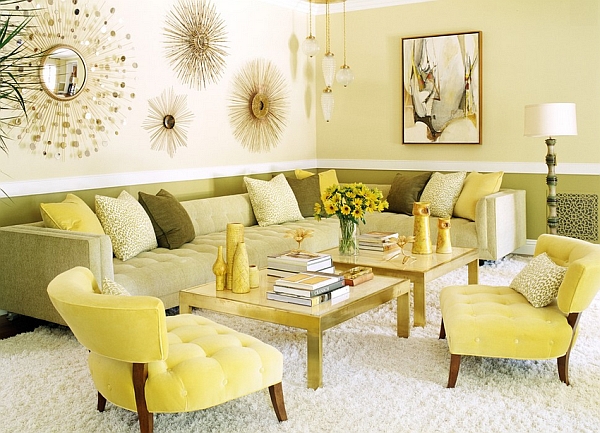 The 70s took place decades ago but a number of fashionable elements remain.  Those who were teens or college kids in the 70s now own homes and live in apartments that need fashionable decor.  Whether it’s a fun throwback item or serious attempt to bring back the decor of the 70s, here are ways to make a splash in every room.

The food is supposed to take center stage in the kitchen but colors from the seventies sure got a lot of attention.  Make visitors do a double take before sitting down in your eye-popping seventies chairs. Bright orange and avocado green were hues that attracted attention.  Additionally, seventies shapes were distinct and totally original from forms that came before and after.

The sixties hosted flower children but the seventies produced an array of bold floral prints.  Show off your seventies reprisal with a funky-printed bed spread or duvet.  Couple the bedding with a large, floral print to hang over the bed or smaller ones to arrange throughout the room.

The seventies was a progressive period but decorators of the time also appreciated classic designs.  For example, many kitchens payed tribute to cottage-like decor.  This was made possible with pieces of pine furniture.  Pine dressers were considered posh and remained ubiquitous throughout the decade.

A long time ago, in the fifties, sunburst clocks started gaining attention.  The style stuck throughout the sixties and seventies.  No living room was complete without the unique tribute to the sun.

Velvet was a popular fabric in the seventies and many families showcased the soft cloth via a family room chair.  The eighties and nineties hosted a range of recliners, but before that, moms and dads made a statement with Statesman Chairs, first made available in the sixties and widely popular in the seventies.

It’s the small things that can make a big impression and bring a room together.  Kitschy prints and designs on coasters were popular in the seventies.  Whether they featured vintage cars or animals in regal poses, any household that wants to pay tribute to the seventies needs a set of unique and kitschy coasters.

Show some leg by selecting a number of furniture items with distinct bottoms.  Metal legs were largely popular in the seventies along with wooden or plastic iterations.  Find bookcases, sofas, coffee tables, and low-sitting chairs with eye-catching legs.

If you’re paying tribute to the seventies era, it’s wise to start collecting a range of owls.  If the kooky-looking owls of the seventies are not appealing or don’t fit with your current decor, consider painting the owls all one color, such as black or white, for a chic end product.

Today, most associate bean bag chairs with college dorms or bohemian apartments, but in the seventies, they were popular with kids and adults alike.  If you don’t like the choices available in brick-and-mortar stores, head to the Fombag website for a range of choices (You can even customize your bean bag chair!)

You knew it was coming!  Of course, no seventies decor is complete without a bit of shag carpeting.  The seventies featured heavy fabrics and shag carpets that found way into many bedrooms, living rooms, and beyond.  You may not be keen on getting an entire room decked out in shag, especially if you have pets that shed.  However, you can still pay homage to the seventies fabric with a small throw rug.

As mentioned, the colors of the period were sure to grab attention and the form of furniture and home elements were eye-catching as well.  Throw pillows with geometric patterns and ironwork sculptures contorted in interesting ways pulls off the seventies decor.

Rather than doors to separate rooms, some people hung beads from the top of the door threshold.  The idea opens the area a bit though puts a damper on privacy if you’re living with multiple people.  However, you can hang beads from certain doorways while maintaining doors in other areas of the home.

Wicker was another unique choice of seventies interior designers.  They are not altogether comfortable so you may want to invest in comfy cushions to place on top.  Cushions with funky floral patterns would be perfect.  If you want to extend your seventies theme to the outdoors, wicker makes for great patio furniture.

Just remember to remove the cushions when it rains!

This website uses cookies to improve your experience while you navigate through the website. Out of these, the cookies that are categorized as necessary are stored on your browser as they are essential for the working of basic functionalities of the website. We also use third-party cookies that help us analyze and understand how you use this website. These cookies will be stored in your browser only with your consent. You also have the option to opt-out of these cookies. But opting out of some of these cookies may affect your browsing experience.
Necessary Always Enabled
Necessary cookies are absolutely essential for the website to function properly. This category only includes cookies that ensures basic functionalities and security features of the website. These cookies do not store any personal information.
Non-necessary
Any cookies that may not be particularly necessary for the website to function and is used specifically to collect user personal data via analytics, ads, other embedded contents are termed as non-necessary cookies. It is mandatory to procure user consent prior to running these cookies on your website.
SAVE & ACCEPT
2 shares