I’m not exactly a master chef (just ask my brother-in-law – the master chef)… so I was pretty excited to check out Sam Stern’s new cookbook, Get Cooking 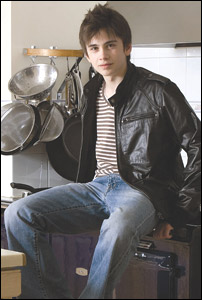 Sam Stern is a famous teenage chef! He was raised in Yorkshire, England, with three fantastic sisters and one brilliant brother — until they went to college and he was left to his own devices. It is not unusual that a high school student loves to eat but his ability to cook and write sets him apart. He describes one of his first memories cooking with his mother, Susan, making her famous treacle bread and opening the oven to see it and says “the smell was great!” This appreciation for cooking led him (when he was a bit older) to write Cooking Up a Storm: The Teen Survival Cookbook

He wanted to write a book “for kids like me who enjoy cooking or who want to learn to cook. It’s full of simple tasty recipes — the kinds of things that my friends and I like to eat.” Their second book, Real Food, Real Fast

is an effort to lure all those time-pressured teens away from their fast-food fixes.

And finally, since no one is harder to please than your friends, Sam took on the challenge of creating stylish and healthy meals based on their favorite ingredients in, Get Cooking

About the book:
With two cookbooks under his belt, Sam Stern was up for a new challenge. So when seven of his friends asked him to conjure up great-tasting recipes based on their one favorite food, he went for it. The result? GET COOKING — one fabulous cookbook with eight sections (including one for Sam), focusing on tomatoes, cheese, pasta, vegetables, meat, potatoes, sweets, and chocolate. Feeling healthy? Try out the Leek and Onion Soup. Eating on the run? Boil up Spaghetti with Oil, Garlic, and Chili.

Augmented by helpful tips from Sam as well as nutritional advice, these slightly more advanced recipes, from tasty appetizers to delectable deserts, are sure to offer something for everyone.

I was really impressed (and slightly depressed) that this kid can whip up such delicious looking meals! The recipes looked a little complicated, but once I tried a couple, I found out they actually weren’t. His recipes are just fantastic and easy for a non-chef, like me, to easily create and serve to my family.

If you have kids over 10 years old who like to cook, buy them this cookbook! They’ll be doing all the cooking for you in no time…