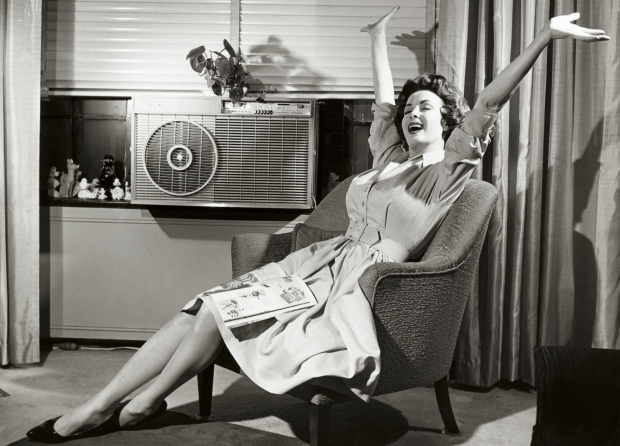 When the summer heat hits, it’s nice to know that you have a cool place to hang out. But, if you don’t have an air conditioning system, you need to know about what’s out there on the market, which are the best buys, and how they work.

Traditional air conditioning, like the kind installed and maintained by Bill Joplin’s Air Conditioning & Heating, uses a refrigerant, ductwork, and a blower or fan system to cool ambient air temperatures and circulate it through the house.

The types of air conditioning units vary by manufacturer, but they come in two basic “flavors”: portable conditioners and central conditioning.

Portable ACs sit in a window opening, in a wall, or on the floor (depending on the model) and cool the home from that one location. Because they don’t use ductwork, their cooling power is very limited and often expressed in cubic feet. They’re easy to install, but they don’t always have an Energy Star rating.

They can be low-cost options, but only if you’re heating one or two rooms in your home. If you need whole-house cooling, it’s usually cheaper to buy a central air conditioning system to improve your home life.

An evaporative cooling system is a simple system that relies on the basic physical principle of evaporation. Think about when you sweat in hot weather and a gentle breeze blows across your skin – it cools you off and quickly.

This is similar to how evaporative cooling works. Residential evap coolers draw in warm, stale, air and then move it over a water-moistened pad or pads (similar to a humidifier) which helps cool it. During the process, the air is cooled up to 20 degrees, meaning if the ambient air temperature is 90 degrees, it can cool it to 70 degrees.

But, these systems work best in climates that are dry, like the southwestern U.S. They’re also most effective during the hottest times of the day when humidity levels drop below 50 percent.

They are almost totally ineffective in humid or muggy climates, like the southeastern U.S. because the air is already saturated with moisture.

Whole house fans work very differently from air conditioning units. Instead of a refrigerant system, they rely on large fans to move or circulate air.

A whole-house fan draws in cooler air in the morning and evening, and forces it up through the attic and out the roof vents. These systems use 90 percent less energy than traditional air conditioners, saving you a substantial amount of money each month on cooling costs.

In dry climates, with cool mornings, it can replace your AC system.

They’re also very easy to install. The only disadvantage to them is that they can’t dehumidify, making them a poor choice for humid climates. Larger fans can move more air quickly, but they’re also more expensive to install and they can be noisy. They also draw in dust and pollen from outside.

GUEST BLOGGER: Daisy Jones is a property investor. She enjoys sharing her real estate insights on the web. Her articles can be found mostly on home renovating and property investing sites.