Annie Duke is one of the newest contestants on NBC’S highly rated show Celebrity Apprentice. Duke, is a single mom and jack of all trades who is known as the world’s most successful female poker player! She spends 16-20 hours at a poker table making a living. Annie has recently explored various business adventures and projects all while being a full time mom of four children and health fanatic. Wow! 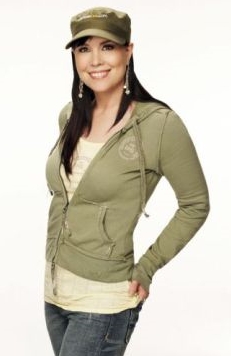 Duke, who gave birth to three of her children at home in her own bed, plans out 15 and 19 mile runs with her running partner. She plans her runs on a daily basis and has actually lost over 20 pounds due to her extensive training which includes Bikram Yoga. Annie is a Yoga fanatic and actually commits to practicing this type of Yoga everyday in a room heated to 105°F (40.5°C) with a humidity of 40%.

Being an Ivy League graduate that was pursuing a Ph.D. in cognitive psychology, Duke never thought she would ever train for a marathon, practice one of the most controversial types of Yoga, let alone cook up the latest dinner recipes of Vegan foods for her children.

Duke often took a lot of criticism for her career choice; however, she has always come out ahead financially and professionally. Poker has allowed her to really be there for her kids when she isn’t traveling and still have a job that she is passionate about.

Duke wrote her first book ‘How I Raised, Folded, Bluffed, Flirted, Cursed, and Won Millions-and You Can Too

’ in 2005 as well as released a series of Poker DVDS. She is now in the process of writing her second book on decision making and has developed her own production company Ten Dimes Productions, which she started with Actor Joe Reitman. She is also involved in various charitable organizations such as the Make-A-Wish Foundation, Ante Up for Africa (a project with Actor Don Cheadle, Brad Pitt, George Clooney, Matt Damon and Ben Affleck), The Children’s Hospital and The Decision Education Foundation.

Are you interested in hearing more about Annie? Tell us!

Previous Post: « Calvin Klein Handbags Up To 65% Off At RueLaLa Boutique
Next Post: Weight Loss: Before & After Pictures »