The following is a great article that appeared today on Fashionista.com.  It was written by the lovely Hayley Phalen, and brings to light an important aspect of our culture and society.  A close friend of mine is a teacher in an inner city school, and has told me many stories of children frustrated and confused because band aids only come in tones that match the skin of white people.  This article is yet another chapter in a book that needs to be updated.  We welcome your comments and insights… 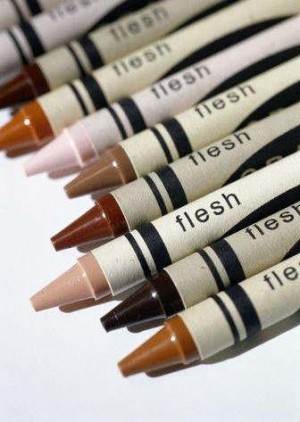 “Nude” bras and underwear usually come in colors like beige, blush and ivory. Except, as we all know, there’s a huge portion of the population whose birthday suits don’t come anywhere close to those colors. So what gives?

Psychologist (and African-American consumer) Tara Raines says it’s been a problem for years and she–along with hundreds of other consumers–have finally had enough. Enter the “What’s Your Nude” campaign–a movement, launched today, that asks women and men of all different colors to reach out to bra manufacturers or bra retailers, become a fan of the “What’s Your Nude” Facebook page, and follow the campaign on Twitter in an effort to promote greater diversity in bra colors.

Raines says the last straw came while shopping–where else–at lingerie behemothVictoria’s Secret. “I decided to enjoy some of the fruit of the Victoria’s Secret semiannual sale. I realized the ‘every day’ bras I wanted were only in black, white, and ‘nude’ and I wanted one in BROWN!” she wrote to us in an email. “They only had very few styles in brown but innumerable styles in ‘nude.’ I got pissed.” After discussing her experience with family members and friends and finding out that for more than 30 years, many of them had been dying their bras brown, Raines decided the industry needed to change. The “What’s Your Nude” campaign was born.

“Women of color have tremendous spending power in the U.S. and it’s absurd to think that in 2012 we are essentially disenfranchised when they shop for lingerie,” Raines added. “It’s my hope that this campaign will drive not only awareness, but swift action by bra makers.”

But why make all this fuss over a bra, you ask? Because, as Raines makes clear, it goes a lot deeper than just being able to find suitable undergarments. “As a group, [women of color] are still fighting to have our beauty recognized,” she said. “Part of feeling beautiful is looking like ourselves.” And that means being able to find brown bras that suitably match their skin color–something that many white women probably take for granted.

“I feel it is imperative that women of color be represented in bras, panties, and lingerie. We shouldn’t have to go to a specialty store, on a goose chase, or spend a fortune to get a bra that looks more like us,” Raines wrote. “Being ignored is a slight. Every time I shop for bras, I am subjected to a micro-aggression.”

And it’s not just the undergarment industry that’s the problem–Raines says that products from SPANX to high-heeled shoes need to start reflecting the diverse skin colors that exist in this country. “Since starting this [campaign] a NUMBER of people have emailed me about bandaids!” Raines added.

She added that hundreds of women had reached out to her and to the “What’s Your Nude” campaign to “share their struggles and their ‘secrets’ for tackling the hurdles of not having brown bras available.” So far the campaign has 1,959 fans on Facebook–and counting.