About a month ago, I got an email from a rep at Whooga boots that wanted to know if I’d be willing to try out a pair of their boots. While the warm winter boots are quite controversial in the fashion world, you really can’t deny that they are practical for winter and a must-have for anyone living in the North East. Upon learning that Whooga boots were made in Australia, I agreed to try out a pair.

I chose the Classic Tall Ugg Boots in chestnut. And even shipping from Australia, they came surprisingly quick!

Being a sucker for cute packaging, I was delighted with the adorable box they came in…

They have a cute little label on the back, just like Ugg Australia boots, but more whimsical looking…

Something I noticed right away, that completely sets Whooga boots on a level above Ugg Australia is the thickness of the Merino Sheepskin wool. You can read more about Whooga ThermoFleece™ Technology here. Just look at how thick and cozy the inside of these boots are…

Whooga ThermoFleece sheepskin is treated without the Chrome Tanning agents that are used in the majority of tanning factories. This results in Whooga boots being both biodegradable and recyclable which is friendlier for the environment. Chrome Tanning is not only harmful to the environment but often causes irritation to those with sensitive skin and is actually detrimental to the durability and flexibility of the sheepskin.

So not only are these boots warm and cozy, but they are eco-friendly too! 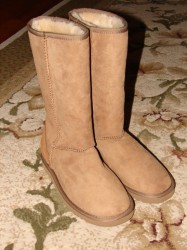 Now, while you may not love the look of ugg boots, their comfort and practicality is undisputed. As soon as September 1st came around, everyone up here in New England started wearing their ugg boots. And I mean, everyone. It’s only mid October and we already had a first snow fall this morning. Yuck!

So needless to say, warm winter boots are a must. I might not wear them out with an evening dress, but you can bet your booty I’ll opt for these on a cold snowy day on my way to the grocery store.

Now, here’s the important part… You’re probably wondering why you should consider Whooga boots instead of Ugg Australia brand boots if you’re going to take a plunge and get yourself some ugg boots. Well, here’s the thing… Ugg Australia brand boots that are hugely popular in the US now, are actually produced in China while Whooga ugg boots are proudly made in Australia. How ironic that Ugg Australia boots aren’t even made in Australia eh? No instead they make them in China for dirt cheap and then sell them for much more than they are worth. And we buy them because they are a brand we are familiar with. Everyone is wearing a pair, so we figure they have to be good, right?

Whooga ugg boots have proven to be higher quality than Ugg Australi’s popular boots. You really can see and feel the difference. To be completely honest with you, I have a pair of each. I have a pair of Ugg Australia classic tall boots in dark brown and this pair of Whooga classic tall boots in chestnut. I personally prefer the Whooga boots because the lining is thicker and softer. It feels like you’re walking on a thick bed of soft cotton balls.

And personally, I’d much rather have Australian ugg boots that are actually from Australia and made in Australia. Seems more authentic, ya know?

Exclusive Discount: Get $30 USD off your order, enter coupon code 73THEFASHION at checkout. There are no conditions on it and they ship to all countries!!