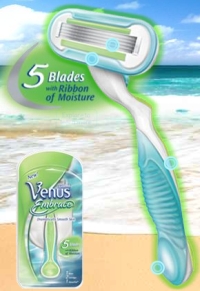 I have always had a love-hate relationship with shaving. I have really sensitive skin and shaving usually doesn’t end well for me. Just minutes after leaving the shower, my legs turn red, and a while after that, my skin starts itching. That night, I usually wake up in the middle of the night to find myself scratching my legs wildly. It’s just not pretty.

For a while I resorted to waxing instead, but that resulted in lots of ingrown hairs and just post boning the itching process that was inevitable.

I finally found a solution though…

3. A Venus razor… nothing else.

I was using the Venus Divine razor, until recently. But Venus has a brand new razor, which just hit stores this month. It has five blades and a “Protective Ribbon of Moisture.” It’s the new Venus Embrace and it’s amazing!

At first I was thinking, “Hey, it’s a Venus razor. Of course it’s going to be good.” So I wasn’t expecting to be blown away because I already know they make good razors.

BUT WOW! I mean, it really works great. Really, really great. It totally blows all other razors away.

I still have to shave with just water and slather my legs with hydrocortisone cream afterwards, but the Venus Embrace is definitely the best razor that has ever touched my legs. You wouldn’t think that razors could really improve that much… They’re just razors after all.

But really, I’ve tried the Schick Intuition Razor, the Schick Quattro For Women Razor, and a bunch of different disposables like Schick Slim Twin Disposable Razors and Bic. I ended up with a big, red rash, itchiness for 3 days, and chunks of skin missing in my legs from all of them. And really, it’s not that I am bad at shaving my legs. I just have really sensitive skin.

When it comes to razors, you definitely get what you pay for. Venus cartridges might be on the pricey side, but for me, they are soooo worth it. Because it’s not just about a smooth shave. I need something that doesn’t irritate my skin or slice and dice my legs.

The Venus Embrace Shaving System retails from $9.99 – $11.99. This includes a Venus Embrace razor, a replacement cartridge, and a ShowerPod (a handy dandy little razor holder with cute little suction cups that let it easily mount on your shower wall).

Want a smooth shave? You want The Venus Embrace! I won’t use anything else on my legs.