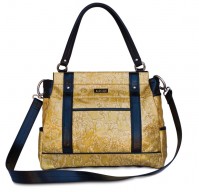 The first time I ever saw a Miche Bag (pronounced Mee-Chee) was on an infomercial during the early fall when I was home sick from work. Now, I’m an infomercial junkie – I love watching them and always want everything I see on them – but I have never actually bought anything from one before. However, when I saw the Miche Bag, I knew that I wanted one.

The concept seemed simple: a basic bag with interchangeable designs on the outside. I thought it was a very novel idea, and I went online to research it more. Over the next few months I kept looking online for reviews and websites that sold them and the different shells. I still wanted one, but not bad enough to buy it without seeing it in person.

Then, one day at the mall I saw a woman with a really cute purse. I complimented her on it, and she responded proudly that it was a Miche Bag! I was so thrilled to see one in person. It looked really good, and didn’t seem like it was obviously a snap on cover over a base. That was enough for me; I was getting one.

By this time it was too close to Christmas to buy anything for myself (I’ve learned the hard way not to buy anything for myself past Thanksgiving because I might be getting it for Christmas an not know it), so I promptly told my mother that I wanted one. When my fiancé and I arrived at my parents for Christmas, my mom told me that she had not been able to find any in stores, so she wanted me to pick out what I wanted online and just have it shipped to my house for a late present. So I did.
The Miche Bag website offers three different base bags, the basic black, the basic brown, and a large black one. I chose the basic black. Then my mother told me I was allowed to pick three shells to start my collection. I chose the black Stacy, the purple Ellie, and the green and tan Darla. Then I waited.

My bag and shells came surprisingly quickly considering I ordered them on Christmas Eve. I received them on New Years Eve. As soon as I opened the package I was in love. I knew that they would look good, but I was pleasantly surprised at how good their quality was. I was kind of expecting something made of particleboard covered in cheap faux leather, but the quality and detail of both the bag and the shells are very impressive. Right away I began trying on outfits to match with my new bag. I’m glad I got the purple one, because my winter coat is purple, and I have several purple shoes that will coordinate wonderfully.

I took it to work the next day and proudly showed everyone who passed my desk. I have received several compliments, and one person decided to buy one herself. (I should become a consultant, haha) I have already scouted out the next few shells that I am going to purchase, and to my delight I have found a shop in my city that carries shells! Another thing that I have found when looking for shells is that some craft sites have people that will make you custom shells. These are not “official Miche shells” and I have not purchased one yet, so I cannot vouch for the quality of these custom ones, but I am interested in possibly trying one.

I strongly recommend a Miche Bag for every Fashionable woman. The initial purchase of a bag and several shells can be expensive up front, but I fully believe it is worth it. The base is $35 for the small black and brown, and $40 for the large black. Shells range between $15 and $35 dollars depending where you buy them and how detailed they are. The large shells go for around $40 dollars. Though I bought mine from www.michebag.com, there are many online and local retailers, along with personal consultants. Just Google “miche bag” and your city to find one near you.

Here’s a sneak peek at what we’re reading this

Saw an Ad for @loopearplugs and decided to take a

Looking for some delicious seasonal treats to offe

Managed to get a picture of my tribe (and me!) loo

Ignore politics for a minute and let’s focus on

Here’s a sneak peek at what we’re reading this

Saw an Ad for @loopearplugs and decided to take a

Looking for some delicious seasonal treats to offe

Managed to get a picture of my tribe (and me!) loo