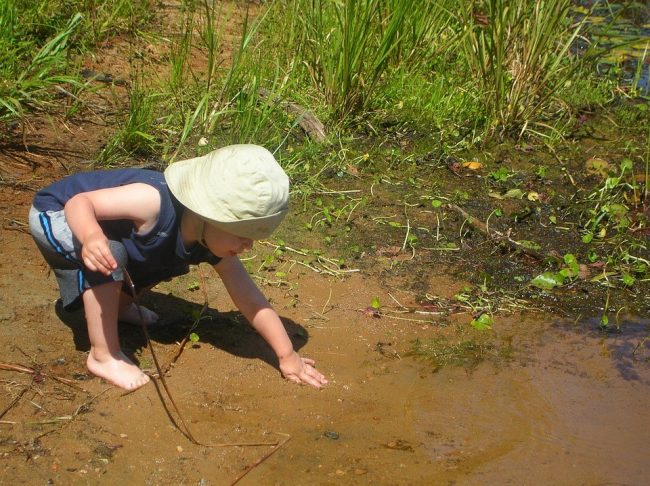 Getting to take your child out for their first camping trip is so exciting! Just like everything else, it just takes a lot more extra planning than before you had kids. Being stuck out in the wilderness without an essential baby item can turn your trip into a disaster way too quickly.  I learned some pretty impactful lessons when I took my three-month-old baby out for the first time. Here are some tips to make sure that you are your little one have a fun and memorable experience in the great outdoors! 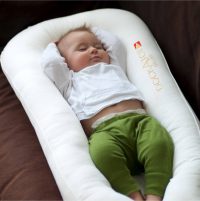 Although the whole point of going camping is to be outdoors, it was super useful to have a nice place to come inside and close a door to the outside. My husband and I used to be minimalist backpackers that would sleep on a tarp under the stars. However, after having a child we bought a family-friendly fifth wheel to pull behind our truck, and it was such a smart decision. Having a separate, quiet area that our baby could go and nap during the day was so helpful. We would put her in the DockATot on the bed in the back bedroom and enjoy the afternoon sitting under the canopy, watching the fish jump in the lake.

Being in the outdoors allows for a lot of baby’s “firsts.” I thought that it would be a good idea to take my baby swimming in a lake for the first time during our trip. I would blow in her face and it would make her hold her breath and would dunk her in the water. She loved it so much that we did it for over an hour. I guess that there can be too much of a good thing because she ended up getting swimmer’s ear the next day. Luckily, I brought along this super cool thermometer and a small pharmacy with me. We were back to playing and exploring more “firsts” (like her first encounters with worms!) in no time.

If there is room to bring two of everything, do it. Bring extra wipes, diapers, clothes, blankets, pacifiers, formula, bottles and anything else that you just might need. Our baby is far from fussy but on our second night out she could not be soothed because her ear was bothering her so badly. She was only calmed by one particular blanket that I was so happy that I grabbed at the last minute. It also ended up being what she laid on in the grass while we played in the sunshine. Also, bring toys with you to keep your little one entertained in the outdoors. Even though camping might be entertaining enough for me and my husband, she played with her favorite rattling giraffe toy more than the grass and the bugs like I thought she would.

Prepare for the Elements

I probably went overboard, but I, as a first-time mom, was nervous about my daughter getting sunburned while we were camping. I bought her a sun shirt that had built-in SPF, applied sunscreen every hour and kept a hat on her most of the day. Sunscreen sticks made putting it on her face so much easier than the cream. I even found an all-natural, organic sunscreen by a company called Badger so that I didn’t have to cover her from top to bottom in chemically-laden sunscreen. I set up a sun shelter for her to lay on her blanket underneath, and it kept her pretty cool during the afternoons; it also kept us dry during a short rain shower one morning.

If it doesn’t go according to plan, don’t worry. Take the lessons that you learn from your child and the outdoors to use for the next adventure, and remember that a lot of nature’s most interesting adventures can be found right near your front door! When you stray farther from the nest, being prepared is the best tool that a mom can have when braving going camping with her young cub. Lastly, don’t forget to take care of yourself in this endeavor. A well-rested and happy mom makes everything run much smoother for everyone in the family.

Previous Post: « Oh my goodness, ya’ll, I’m on Zulily!!!
Next Post: How To Revamp Your Post-Partum Work Wardrobe »