In 2008, the recession hit everyone pretty hard. People had to make desperate decisions just to get by. But giving up a life in New York City filled with Valentino pumps, subscriptions to Vogue magazine, and access to Diet Coke just to move to Iraq? For a Fashionista, that’s just crazy talk, right?! 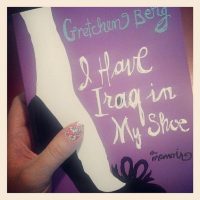 I Have Iraq in My Shoe: Misadventures of a Soldier of Fashion

, a new memoir by a single, broke, fashion-conscious American woman who writes about her adventures in teaching English to conservative Muslim Iraqis.

When Gretchen Berg is offered the chance to move to “The Iraq” to teach English, she immediately declines. But after a tempting salary is thrown her way, she remembers her looming unemployment and amazing credit card debt of $39,000. The only thing stopping her now is the absurdly high costs of oversized luggage.

Gretchen discovers that in leaving New York behind, she might just find some new adventures, such as:

Berg’s memoir promises to be fresh and intelligent, all while brutally recounting her year spent in a desert thousands of miles away from her New York City apartment.

This book s the latest addition to my “fashion book” library and I can’t wait to get five minutes to sit down and start reading it! It sounds incredibly interesting, don’t you think?!

Disclaimer: I was sent a copy of this book for review. All opinions are 100% my own.