0 shares
MUCH ADO ABOUT A MUTE SWAN: Part 2
…And the Swan Came Back…

My 3-year old son was yelling, “Momma Swan came back! She’s here and she bit my finger!” I came running downstairs, and my son, Noah, had opened the slider when Princess knocked. Noah really liked Princess because well, she looked like an enormous, fluffy down pillow on legs. And what do you do with down pillows when you’re a kid? Well, you body-slam them, of course!!! 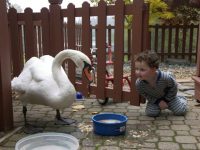 Noah just stood there outside, following Princess around the yard, and she was mildly annoyed. Noah gleefully announced, “But Momma, I just try to hug the Momma Swan an’ she bit my finger! See see see!!!” His thumb was red, but Noah was red-cheeked and happy. He looked as if he had just gained membership to some cool, exclusive kid’s club. The swan nipped him and this was cause for celebration!

I took Noah by the hand and explained, “Momma Swan likes us, but she doesn’t like when you sneak up and hug her. It scares her and she bites little fingers when she’s scared. So, let’s just watch her, okay?” He agreed. 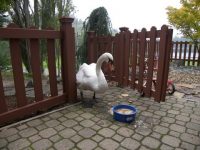 That morning, we had some flowers to plant and some yard-clean up to do. Princess was content to stay in our yard and waddle behind us as we planted small marigolds and did our weeding. I kept bowls of food and water out for her, and every so often she’d get bored watching us and would walk over my newly-planted flowers to get back to her snacks. Her favorite treat was actually Pepperidge Farm Goldfish crackers, as Noah soon found out. Sharing the peanut butter filled pretzels didn’t work out so well. But, she absolutely loved the Cheezits if goldfish crackers weren’t available, and Noah loved to throw them down and watch her nibble them up, one by one. Sometimes he’d leave a little trail of crackers and she’d wattle behind Noah, duck and slurp, duck and slurp, duck and slurp, all around the yard after him.

But, then there was the issue of her mate, Prince. He was all the way across a small street, a grassy clearing, and stuck on the lake near the rickety dock. He would watch us from far away, very longingly, tracing her steps with his eyes. Sometimes he’d make a large honk-snort sound at her, and she’d stop and answer with a louder honk-snort back. I could imagine their conversations: “But hoonnneeyyy you said you’d only be lunching with your best girlfriend for an hour, and you have already been gone two. Please come home and fix me diiinnnerrrr!” And Princess would answer, “But I left plenty of pond weeds in the fridge for you– if you’re lonely, go and find some bro-mance for yourself!!” And then Princess would go about her business. 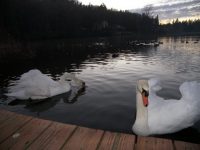 Princess was 23 years old at the time, at for the first time in the history of her 22-year relationship with Prince, she was getting a life, venturing out, and having some new adventures. A part of me felt sorry for Prince. Mute swans choose one mate, and they mate for life. There is no such thing as mute swan divorce or flirting with other mute swans. And after they pair-bond, they are pretty much attached at the hip for life. Prince was used to 22 years of swimming around the small lake with Princess at his side. They’d feed on roots together, clean their wings and bathe side-by-side, and in the spring, they’d build an elaborate new nest. Unfortunately, even after 22 years together, Prince and Princess were never blessed with cygnets of their own, and they only had each other. Prince was not liking Princess’s new found hobby of crossing the road. Why, I’m sure to him it seemed impossibly scandalous.

Then there was the problem of my dog, Sammy. Like most dogs, Sammy has super-hero hearing, and he could probably hear through 5-foot thick lead walls, if you really put him to the task. Unfortunately, we didn’t have 5-foot thick walls, and Sammy is a Cocker Spaniel, which means he LOVES birds.

It turned out that Princess developed a hankering for 1am snacks of Goldfish crackers. And, we found out that if we forgot to close the gate at night, Princess would come calling at all hours. And Sammy could hear the slightest twitch. So, it would be 1:00am, and the dog would start screaming at the top of his lungs, “Hey Mistress, I hear that darn bird again! I smell that darn bird again!! You better open the damn slider door because I am going after that biiirrrdd!”

Sammy wasn’t so lucky and he had to stay inside, trying to tear the glass of the slider doors up with his paws. He actually only succeeded in leaving permanent scratches on the glass, which are there to this day.

The next night, I remembered to close the gate. But, that didn’t work. Sammy started barking again, and this time I asked my husband to go downstairs and see what the ruckus was. 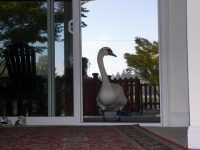 My husband, sleepy-eyed and world weary, came back upstairs, carrying the frantically hyper dog, and mumbling, “Your swan is here and she won’t take no for answer”. I scrambled to get the food bowls, and I headed downstairs. I turned on the outside porch light, and there was Princess, pecking at the gate, and flapping her wings, trying to gain entrance to the yard. I said, “Princess, shame on you. You need to go back to the lake because we have coyotes around the neighborhood”. But then I let her into the gate, set down the bowls, and wandered back to bed.

The dog was upstairs shaking from head to toe, looking as if he were ready to burst from all the excitement. I called my mom is the morning and asked if the dog could start spending nights at their house which was 3 miles away. And so, Sammy started to spend nights at my parents house where the bird wasn’t such a distraction.

Princess was undeterred though, and she still showed up after midnight, just about every night. I set bowls of food out before bed, left the gate open, and would find evidence in the morning that she had come for her snack.

I didn’t realize that soon things were going to change, and that Princess’s eating patterns were a foreshadowing of what was to come.

Previous Post: « Save at least 54% off Seamless Shapewear at Jasmere.com
Next Post: Add a Little Silk to Your Style »