0shares
MUCH ADO ABOUT A MUTE SWAN: PART 18

“Prince Has a Sense of Humor After All”

Who says animals don’t have a sense of humor?

Today since the sun was out and there wasn’t a cloud in the sky, I decided to go feed Prince at 12:30 in the afternoon, instead of my regular feeding time which is at 5:00pm. I also hauled my son Daniel over there in his bright, red stroller.

Prince made huge waves across the lake as if to get to me urgently. I knelt down in front of his feeder bowl. As usual, he parked himself right in front me.

Now normally, Prince parks himself right in front of me and sits still, waiting to be fed. If he’s impatient, he will occasionally nip at the dock.

But today he did something he had never done before. Before I could even move away, Prince has reared up on both of his legs, spread his wings, and literally started stomping on the water with full force. In less than two second flat, me and my camera were soaked from head to tow.

I fell backwards and landed on my butt, stunned, thinking I had somehow made Prince angry. But, instead, he just settled down, gave me a side-ways look, and then lifted his butt and gave me a huge tail wag.

Yes, Prince had pulled a good one on me and was practically laughing at me as he wagged his tail back and forth and splashed me with more water in the process. I could practically see the smirk on his beak.

What’s worse, I was even wearing a new pair of jeans and brand new blouse and sandals that I had gotten from Alloy.com the previous day. Prince sure had good comedic timing.

Or maybe he just didn’t approve of my outfit. He is a swan with impeccable taste in clothing, after all.

I sat down on the dock, and knelt close to Prince, and said, “That was a good one, buddy. You got me good today”. He gave me a head bow, and I forgave. I sang him a few verses of the Alleluja song and he returned his thanks with a few deep, low purrs. I took his purring as a kind of swan-apology.

After I dried off, I moved Daniel’s stroller closer to him and he and Daniel checked each other out. Prince looked at me like, “Okay, I knew you had one son– but now two? *Sigh*” He swam around and examined Daniel and his stroller from all angles. Daniel bent over to give him and good look and then hardly seemed to pay attention to Prince at all. He’s was enjoying the sun on his face and watching the song birds that flutter from reed to reed.

Prince forgave me soon enough for being a mom with two children and started mining the bottom of the lake for branches. He eventually found one and allowed me, for the first time, to take the branch from his beak.

This was a major event in my relationship with Prince since he has never let me take anything from his beak. Sure, he’ll gingerly take bread from my hands, and even expects to be hand-fed on most days, but he never lets my hands come close to his face to take a branch from him.

Prince was beginning to trust me more and more. 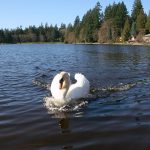 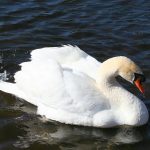 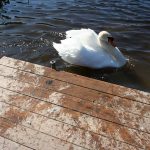 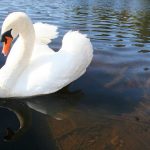 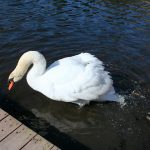 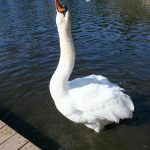 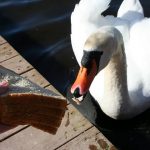 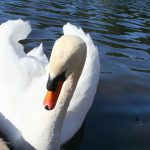 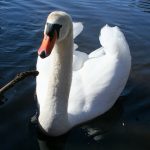 We are so excited to partner with @LowesHomeImprov

Moisture is one of my highest priorities, especial

We are so excited to partner with @LowesHomeImprov

Moisture is one of my highest priorities, especial