“The Voice of Kindness” 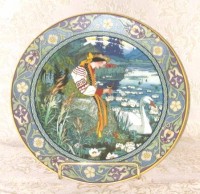 Image of Russian Folklore Plate – Titled – The Voice of Kindness
Although there is a movement in many states in the United States to outlaw the keeping of Mute Swans, that in no way diminishes the swan’s lovely entanglement with story-telling and with human history, throughout various ages.

These swans can be found peppering ancient Chinese, Russian, Irish and even Japanese fairy tales and folklore. This swan has made an indelable impression on the human consciousness and experience itself. 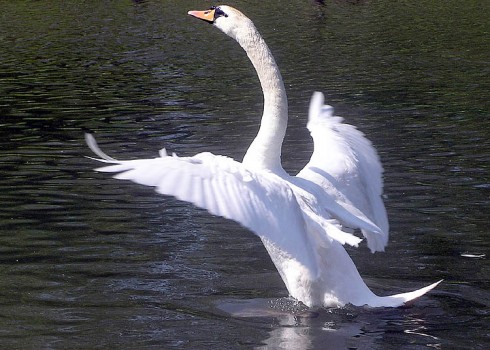 Prince Spreads His Wings in a “Victory Stance” – Swans Do This When They’re Happy
In ancient Rome, Caesar kept these swans in his water gardens; and even further back than that, one can find reference to mute swans in ancient Egypt that were being kept and cared for by Pharaohs.
In medieval England, all mute swans were property of the Queen herself.  However, these swans were given as gifts to certain noble houses, and were prized gifts, indeed.  When a nobleman received such a gift from the Queen, he would mark the bill of the swan with certain grooves that represented his house and Lordship over his swan.  As swans like to wander and fly away, the Queen would hold a “swan-upping” every year and all of the swans in England would be identified and returned to their owners.  Any unmarked wild swans were immediately subject to the Queen. This tradition continues until this day and is held on the Thames River each summer.

A Cygnet Is Presented to the Queen During the Swan-Upping
In modern times, the mute swan graces the coins of Ireland and of China and they are considered very sacred birds by both of these people.  In Russia, many wild mute swans grace rivers and live side by side with people.  One can find them floating in small lakes in front of French castles, and in Italy, gracing various parks and warm coastal areas.  Entire fields of mute swans can be seen taking flight in Denmark, where they are also protected.  In Canada, Stratford holds an annual ‘Swan Parade” where 50 trained mute swans march with gentlemen playing bag pipes. 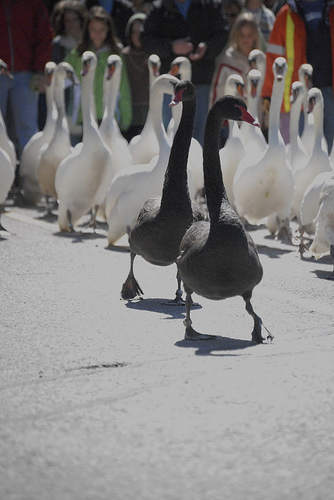 Stratford Swan Parade
In essence, the rest of the world has a much different attitude toward this beautiful creature than we do here in America. In Maryland, the Human Society has fought the state year after year since the state wants to do a managed mass-killing of these swans.  The state is concerned they consume too much plant material from the Chesapeake Bay water-shed.  Washington, California and Oregon all consider them to be a ‘deliterious species’. 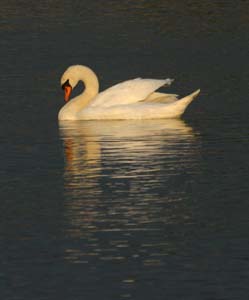 Prince Bows During a Warm Afternoon
Then there’s my own Prince Charming.  As you have probably figured by now, I am un-ashamedly in love with this handsome swan that we call Prince.
One day when I was out on the lake and Prince was bowing and closing his eyes tight, he came very close to my face and made a very low growling sound.
I jumped backwards, thinking I had made him angry.  But, he just sat there, still in the water, eyes shut tight, continuing with a low growl that started almost to sound like a cat’s purr.  I waited and watched and he continued purring.
When I got inside that day, I emailed the swan experts, and they were a little surprised to know that the swan was doing the noise at me.  Apparently, most humans never hear this sound, as this is a sound that swans make when they are deeply contented and huddling close to each other.  It’s one of their ways of saying, “I love you” and it’s only reserved to those very special to the swan’s heart.
Prince wasn’t giving me a growl at all– but rather, a deeply contented purr– and a purr to let me know that he loved me.
At that moment, I felt extremely special.  I had seemingly bridged a gap that most humans may never encounter with a swan.  I had developed a deep, soul-connection with Prince and he was willing to tell me how much he cared in his own words– literally.  I was extremely touched.
Sometimes animals can heal our hearts and understand us in a way that no one else can.  I know whenever I am having an off-day or feel stressed, I can go to the lake and Prince will always coming to me, running across the water with enthusiasm.  Prince has an incredibly kind heart.
On occasion, my comfort and relationship with Prince reminds me of a 16th century poem by Saint John of the Cross.  I will leave you with his words– since he says it best.  He explains how animals can make us feel better just by their silent knowing:
I was sad one day and went for a walk;
I sat in a field.
A rabbit noticed my condition and came near.
It often does not take more than that to help at times–
to just be close to creatures who
are so full of knowing;
so full of Love
that they don’t
chat,
they just gaze with
their marvelous understanding.
(stay tuned for part 14…)