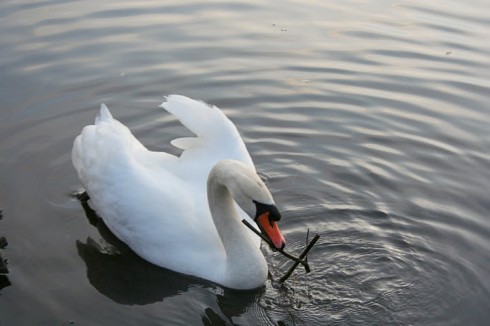 Even though it’s now late February and Spring hasn’t quite yet set in, Prince is getting a hankering to court again and to hunker down with the girl of his dreams.  The days are growing longer, the morning air is more balmy than usual, and the song birds have returned.  That’s enough of a cue for Prince to try to win the affections of the swan he has set his eye on– after all he follows nature’s cues and doesn’t pay attention to mere calendars, for heavens sake! 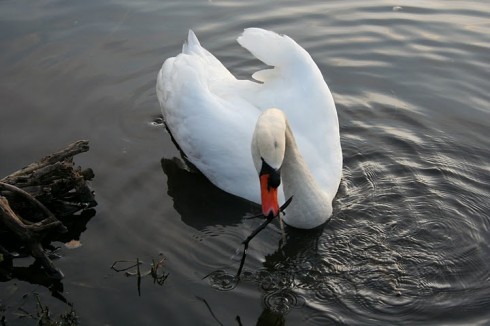 And so, Prince starts the process of searching the shallow lake bottom for twigs and other nesting materials to present as gifts to the girl he is hoping to win over.

This spring, Prince has, by an overwhelming vote, decided that I am the girl of his dreams.  Nope, no new swans have arrived, so he has had to look for other fish in the sea.  Heck, he isn’t even looking for fish– once again, he has his eye on a human female, and once again, he has chosen me as his sweetheart. 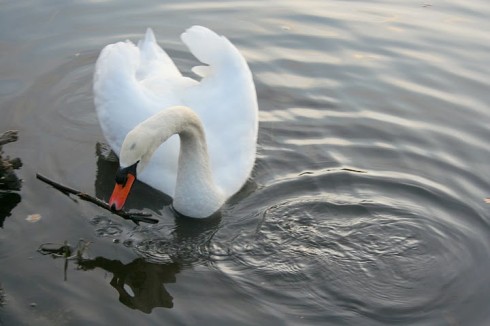 ..BUT WAIT, THERE’S MORE!  HERE’S ANOTHER ‘LOG’ FOR MY LOG-CABIN

Yesterday evening, I was out there on the lake when the sun was setting, attempting to feed Prince.  Of course, all 50 ducks who inhabit the lake flew around in a flurry of excitement, and even the blue heron made an appearance.  But, not Prince.  He would have nothing to do with it.  No, siree!  He just turned up his nose at the food I was offering and he looked as me with eyes half-closed, looking positively love-sick. 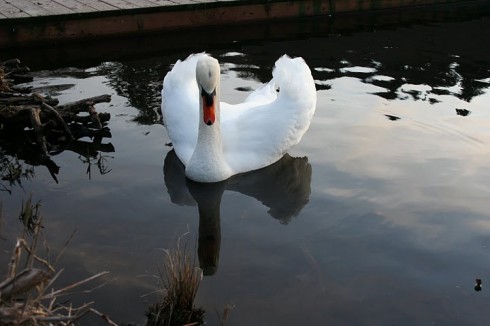 THIS ONE IS HEAVY AND FILLED WITH POND WEED – UCH!

He then began his search of the lake bottom and started grabbing various dead branches in his beak and bringing them to me, sitting them at the shore of the lake, where I sat with my son Daniel.  Heck, Prince isn’t even deterred by the fact that I am already married and have two children! What a guy!

After presenting me with six branches, three on each side, he sat stone-still in front of me and waited until I praised him.  I told him in a sweet voice that he was such a sweet boy and I thanked him enthusiastically for his wonderful gifts. 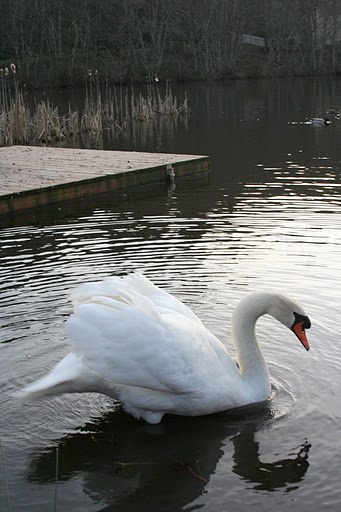 I AM PLEASED, And PRINCE LIFTS HIS BUTT OUT OF THE WATER AND GIVES ME A HUGE TAIL WAG

Prince was so happy that I accepted the presents that he gave me, and so, he raised his butt out of the water and gave me a very hearty tail-wag, indeed. 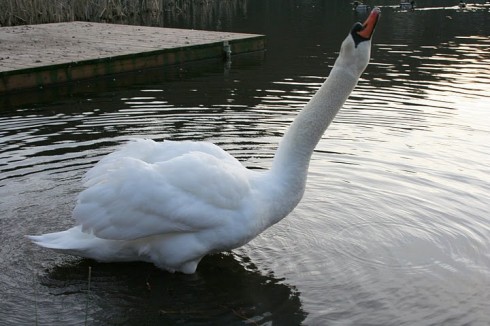 AND FINALLY, HE GIVES ME A NECK STRETCH AFTER I GRACIOUSLY ACCEPT HIS GIFTS.  HE BREATHES ASIGH OF RELIEF!!

And his hearty tail wag was followed by a long neck-stretch.  Dragging branches from the lake bottom is very hard on the neck, you know!!!  Finally, Prince was willing to eat the treats I brought for him– his usual evening fare of cracked corn, and some gourmet wheat bread, sprinkled in with a few Cheez-it crackers.  Yes, that’s right, no chocolate cake for Prince, his favorite guilty-treat is Cheez-its.  He simply cannot get enough of them, and it makes his day whenever I bring them. 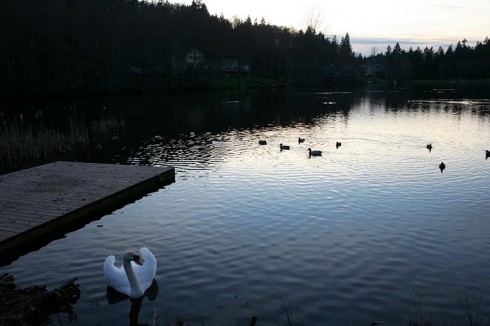 It was getting dark, so Daniel and I said goodbye to Prince for the evening and wished him sweet dreams.  I sang him a little bit of the Alleluja song and his evening ended serenely.  As I walked back to my house, Prince swam back to his own house, gliding silently and sweetly through the water.

When I got home I contacted some neighbors to see if our ‘swan bill’ had made any progress and moved over to the house of representatives.  I was impatient to find Prince a swan friend since I certainly couldn’t fulfill the level of companionship he needed.  Though, I am trying my best to make sure he is not so lonely.

Previous Post: « Adding Exercise to Your Life: The Fitness Challenge
Next Post: Celeb Style: Who Wore it Better? »