“So What Do You Say When a Member of the Senate Committee Says They Were Viciously Attacked By a Swan?” 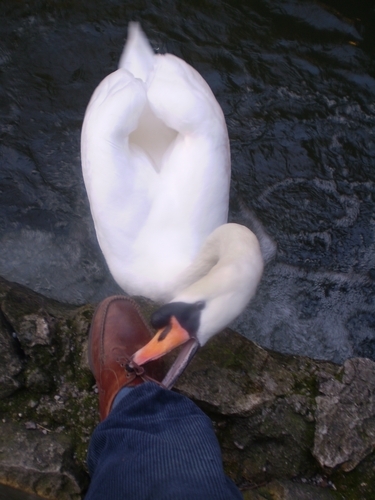 My neighbor Bill was working hard with one of our state senators, Derek Kilmer, to draft a new bill to allow Sylvia Lake to obtain a new friend for Prince.  The bill number was 6625 and was slated to be heard on the first day of the new session.

Glenda, her husband Gordon, my son Daniel, and myself all carpooled down to Olympia on that Monday, armed with a picture calendar I had put together of Prince, along with various photographs and newspaper articles.  I wore one of my black corporate suits and Italian leather shoes.

We met Bill and his wife Pat outside of the senate committee room and then shuffled in to have a pre-session meeting with the senator who was sponsoring this bill.  The senator’s half-joking remark was, “I hope sponsoring this swan bill is NOT my swan song”.  We all laughed.

Several others had shown up from the neighborhood to show support.  We huddled before entering the committee room and it was decided that Bill and I would be the two people to speak before the senate committee.  We were advised not to have prepared speeches, as time would be of the essence.  The committee had many new bills to consider that day, and ours was considered ‘less important’ than the others.

At 1:45 it was our turn to speak, and I sent Glenda out of the conference room with my son Daniel.  I didn’t want a crying 15-month old interrupting the meeting.

The senate committee sat in a tiered, half-circle.  Each of them had laptops, desks, and microphones.  Their desks were all raised much higher than those of us sitting on the senate floor, so we had the impression we were ‘looking up’ to them, and then they in turn were ‘looking down’ on us.  It was quite the formidable sight and quite frankly I was shaking in my leather shoes.

One of the senators first questions was why they should allow a non-Native species to be made legal in the state.  Bill answered quite frankly that most animals in the region were non-Native at one time or another and that we were asking simply to have a non-breeding pair of swans which would stay on our lake.

Another committee member mentioned that mute swans are quite hostile creatures.

I made my segue into my side of the story about Prince being a pet, and hardly a hostile one at that.  A large, burly senator started speaking over me and said he had been viciously attacked by a swan at one of the state parks, and that it was quite a frightening experience for him.  Now, to hear that coming from the mouth of a man who appeared to be 6’4 and 250 pounds was a little laughable.

And, unfortunately, I did laugh.

An image from the TV show ‘Curb Your Enthusiasm’ popped into my mind and I remembered a recent episode where Larry is golfing and gets viciously attacked by a lone ninja swan.

I looked at the senator and said, “So, your were attacked by a swan the same way Larry David was in Curb Your Enthusiasm? Did you swing your golf club at him too?”

Whoops!! The words just ‘flew’ out of my mouth!

The senator knew EXACTLY which episode I was talking about a blushed and laughed.

The other senators were NOT amused by my lame attempt at humor.  The female senator in the front row shot me an especially sour Janet Reno type expression.  Uh-oh, I wasn’t in Kansas anymore.

I composed myself and continued to tell the tale of the gentle Prince who was hardly a menace to anyone.  In fact, Prince was so not a menace, my guess is that he’d even woo and bring pond flowers to the female Janet Reno lookalike.  Yup, he was definitely a dangerous Romeo– a real bad-boy, to say the least.  Now all I needed to do was to buy him a leather jacket and a Harley.

No one was amused.  They asked why on earth we had brought our swan’s dating problem before the senate.
Bill piped up and said for the past two years, he had worked patiently and diligently with Fish and Wildlife, and he had gotten nowhere with them. In fact, he had gotten nowhere with Fish and Wildlife several times over.  At that point, Bill explained that he decided to take our swan issue to our local representatives, having exhausted other avenues.

Some representatives from Fish and Wildlife sat in the room.  One of the senators on the committee shot a look towards the head of F&W and said, “This never should have gotten to us.  It should have been taken care of by Fish and Wildlife in the first place. You guys weren’t doing your job”.

Bill reiterated that because Fish and Wildlife wouldn’t work with us, and because we are law-abiding citizens, we had to take this to the next level, which was the state government itself.

And the Senate committee was obviously NOT amused.

When we were finished speaking, I left the conference room to check on Daniel and Glenda.  Daniel was crying up a storm because he was in a new place, and poor Glenda’s efforts at calming him didn’t work.  His cries echoed down the marble hallways of the State building and I felt like crawling under a desk.

After the meeting concluded, Bill came out of the conference room looking a little defeated.  It turns out the Audubon Society had been there and had spoken against having mute swans in our state. They were also for re-establishing Trumpeter Swans into their native habitat and they felt the mute swans were a threat to their goal.

The senate committee would deliberate over bill #6625 and decide whether or not to pass it onto the House for further deliberation and eventual voting.

We all got into Glenda and Gordon’s mini-van and made the long, rainy drive home.  Hopefully, we were one step further to obtaining a new mate for Prince.  Only time would tell, and with a little luck and perhaps a guardian angel, Prince would have love again.