0 shares
MUCH ADO ABOUT A MUTE SWAN: Part 10
“Then The Lake Froze” 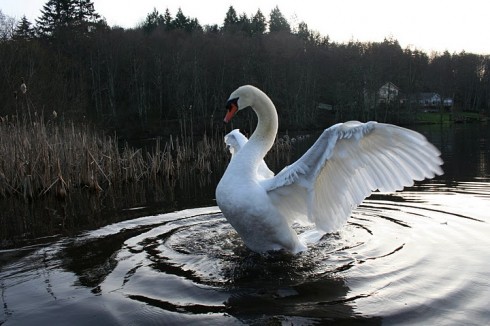 Thirty days later, the cygnets hatched, but they were immediately transported to an animal rescue by Fish and Wildlife to assess their health. One of the representatives at Fish and Wildlife was putting things into motion so we could pick the cygnets up after their wings were clipped and after they were given a clean bill of health. I couldn’t wait to cuddle these little bundles of feather and down and I was preparing a permanent home for them on my property.

But, then, Fish and Wildlife stalled, and when Bill checked into it, he received a rather upsetting email back from them.

It seems a committee of representatives from Fish and Wildlife assembled before even consulting with us. And during their meeting, they made the executive decision to have the baby swans euthanized. We never had any warning.

Bill was notified via email that all of the cygnets were euthanized when they were only a week old. They never left the animal rescue alive.

When I got the news, I felt shattered. Not only were we back at square one with finding more swans for the lake, my dream of three little fluffy cygnets to whom I would play Mommy was also shattered. With all of the ‘nesting’ hormones coursing through my own veins, I took the news rather badly. I stifled tears all day long, and sometimes broke into long sobs. The thought of three beautiful lives being snuffed out “just like that” was just too much for me to take. 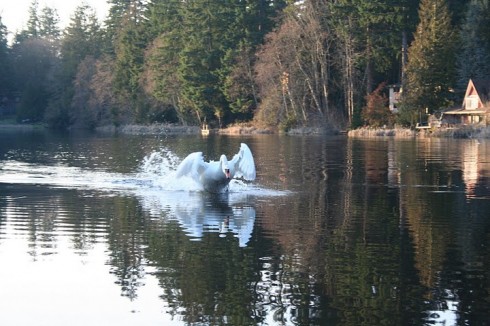 That’s when Bill decided to pull out all of the stops and let the local media know the situation here at Sylvia Lake. We also got our state representatives involved.

We assembled our own meeting with Derek Kilmer, Larry Seaquist, and Jan Angel. They met a large group of us homeowners at the lake and we told them our story. I also provided a demonstration of how Prince runs across the water when I call, how he takes food gently from my hands, and how he bows his head when I sing. Prince performed beautifully for a group of about 50 people. I was so proud of him!! 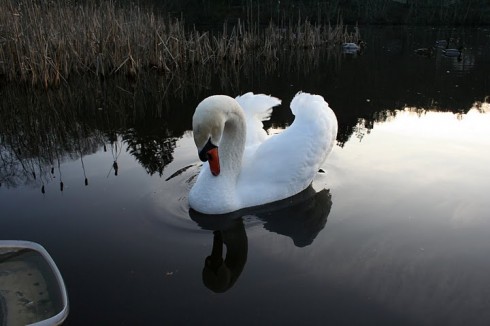 Prince Bowing His Head While I Sing the “Alleluja” Song by Michael W. Smith

Our state representatives sympathized with our plight and they ended up starting the process of introducing a bill to the state legislature. The bill would state that mute swans were no longer deleterious species and that homeowners would be allowed to own swans who had clipped wings and who were sexually altered; or they could own swans that were all of the same gender so that they had no reproductive capacity. 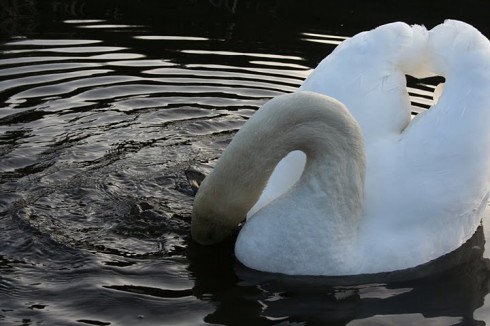 Prince Scratching His Head With His Right Foot
(If you look to your left, you’ll see part of his black webbed foot next to his head)

All along, we did not think that we would have to actually take our case to our state representatives. However, because we had made no headway with Fish and Wildlife for over a two-year period, we had to take our plight to the next highest authority– and that authority was the state government itself. We were unintentionally starting a grass-roots movement for the on-going welfare of mute swans. 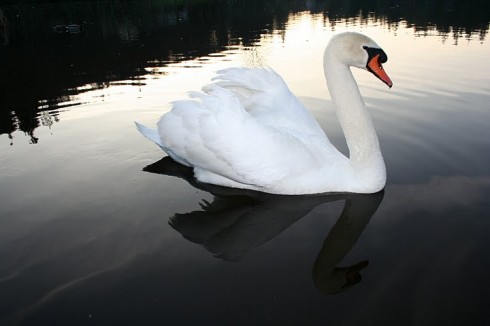 The story of our plight spread, and pretty soon, our local ABC affiliate, KOMO-4 news, was camped out in front of my house doing a story about Prince. As will happen many times with the media, they will put their own spin on a story, even after they have heard the whole story. Their spin on the story was “Someday Prince’s Prince May Come”.

You see, long after Princess died, we found out that she had incidentally been a male. And that fact actually would explain a lot. It would explain why “Princess” would come up to my house to visit me, because perhaps ‘she’ was courting me the same way Prince had started to court me. It would also explain why people who had lived at the lake for 20 years reported seeing the swans building separate nests on several occasions. They would refer to these occasions as “marital spats” between the swans as they had always assumed Princess was female. When really, it seems they were both building separate nests to attract a random female who might happen to fly by in the spring. This would also explain why there were no cygnets and no observable mating behavior between these two swans in the spring. Sure, they would tend a nest together occasionally and take turns sitting on a rock, but they never did mating dances or stayed as close together as mating pairs normally do. These swans were more like “The Odd Couple” than “I Love Lucy”.

KOMO-4 news decided to run with the fact that Princess turned out to be a ‘Prince’ and they ended up making a rather humorous piece about it, even if it wasn’t remotely the whole story.

Here’s the link to their video where Prince receives his 2 minutes and 45 seconds worth of fame:

The state legislature was ready to come into session and Bill and I were preparing to go down and speak at the preliminary hearings. Prince’s story was far from over, and besides, he still has 12 minutes and 15 seconds worth of fame to go!!

Shop Platforms, Jumpsuits & Rompers, Socks & Tights, Over the Knee Boots and more. Get this widget.