Although everyone endures some form of pain from mild annoyances to excruciating levels occasionally, there are some types of pain that women complain of more than others. While leg and arm pain is big with women who work on their feet or with their arms, those are not the most common sources of pain that cause women around the country to seek treatment. Doctors from Southern California to Michigan pain specialists report the following common causes bring women into their offices more than any other kind of pain and also suggest some effective treatments. 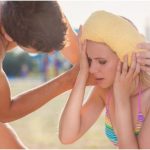 Headaches, especially migraines, are huge in women. In fact, think about it for a moment. How many men do you ever hear walking around complaining about a migraine? Yes, men do get migraines but they either bear that type of pain better or aren’t as susceptible to migraines as women are. According to the Migraine Research Foundation, women are three times as likely to suffer from a true migraine as their male counterparts are.

There are a number of medications on the market for the treatment of migraines ranging from narcotics to specially formulated pharmaceuticals developed specifically to address migraine pain. One of the leading medications on the market is Imitrex that was developed to ease migraines in those suffering from this often debilitating condition. Also according to WebMD, caffeine can sometimes be used to treat a migraine but they also report that caffeine can be a trigger so it is better to use it sparingly until you consult with your doctor who will run adequate tests for a verifiable diagnosis and recommended course of treatment.

The most common source of abdominal pain in women is something that is part of what being a woman is all about, menstruation. Of course this takes place in the lower abdominal region and the onset is experienced roughly every 28 to 30 days. Although the largest contributor to menstrual pain is uterine contractions that inhibit the flow of blood from getting to the uterus’ lining, other causes include such things as bloating and an elevation in leukotrienes that many believe to be an underlying cause.

As the uterus sheds cells, they are passed through the very small opening in the cervix, which is obviously why the uterus contracts. The medical term for severe menstrual pain is dysmenorrhea and there are just about as many types of treatments as there are women suffering this pain – which is a lot! Pain medications and anti-inflammatories are common treatments but some women use heating pads while others swear by OTC formulations with caffeine. The best information you can find on the cause and possible treatments for dysmenorrhea, menstrual cramps, can be found on the Mayo Clinic website if you are a regular sufferer in need of relief.

There probably isn’t a woman on earth who hasn’t fallen prey to chronic pelvic pain but the problem is always in diagnosing the underlying cause. With modern medical technology it is easier than ever before to get to the root of pelvic pain, but common causes include (but are not limited to):

Infections are usually linked to STDs (sexually transmitted diseases) and most can be treated with one or more rounds of antibiotics. However, some types of diseases can’t be cured but can be held in a sort of remission if proper care and precautions are followed.

In a case where the cause of pelvic pain is from an infection, antibiotics can kill the organism responsible for the disease but they can’t stop the pain. This is where pain medication and home remedies are most helpful. It is also highly recommended that you refrain from having sexual relations until the source of the pain is identified and contagions are ruled out.

Women seem to experience these common types of pain always when their life is most hectic. Is it Murphy’s Law at work? It just could be but one thing is certain and that is with kids running around the home, household chores to see to, perhaps a job to go to and a million other responsibilities that need to be met, pain is something that needs to be dealt with sooner rather than later. If you have any type of chronic pain, do yourself a favor and contact your doctor without delay. If he/she can’t identify the source you can be referred to a specialist who can. Don’t suffer when help is out there!

Previous Post: « What to Do When a Cancer Diagnosis Is Confirmed
Next Post: 5 Essentials for At-Home Date Night »