No drugs and no infidelity required. haha

Just buy your husband a pair of these sexalicious Andrew Christian men’s briefs, and you’ll never have an impromptu “headache” ever again. 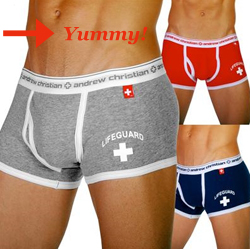 Andrew Christian recently improved his #1 selling Flashback Underwear by adding a super soft, super comfortable “Anti-Muffin Top Elastic”! And they really work too. While most undies give even the most in-shape men a lovely little muffin-top, the design of these briefs completely eliminate them all together.

The super sexy briefs already have built in butt-lifting and contouring technology, so the added anti-muffin top elastic and contrast stitching to the underwear just put these over the top. They’re like Victoria’s Secret for men!

“My entire line of underwear is meant to help make men feel good,” says Andrew Christian, “I first introduced the anti-muffin top elastic with the Andrew Christian Pro Lifeguard series, and when I saw how overwhelming the response was, I wanted to add it to my other lines, beginning with the Flashback. The upgraded Flashback underwear continues to set the bar higher in the world of fashion underwear.”

My husband has 1 pair of the Pro Lifeguard Low Cut Boxers. Just 1 pair!!! I literally want to throw all of his other boxers away and replace them all with underwear from Andrew Christian.

I mean really… these underwear are so hot, they’d probably make even Hugh Hefner look good. I don’t think any other briefs in the whole world could do that. Except magic ones…