Something you might not know about me… I’m a HUGE Bob Marley fan. If I’m going to listen to some tunes in the car or while I’m working around the house, I almost always go for either Bob Marley (or Michael Buble)!

I was really excited to hear that Grammy-nominated musician Ky-Mani Marley, the son of the legendary Bob Marley, authored a new memoir, “Dear Dad 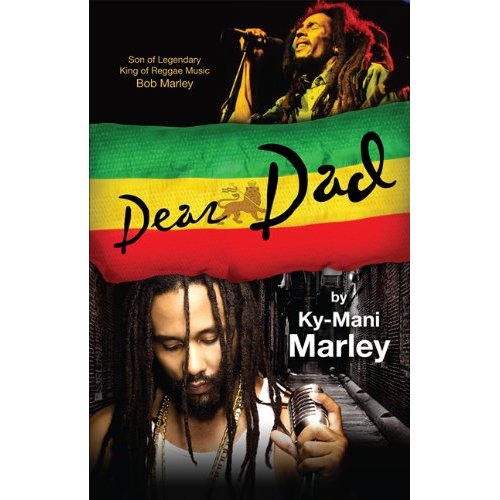 Time Magazine called Bob Marley the Artist of the 20th Century, but to Ky-Mani Marley he is “Dad.” The reggae superstar died when Ky-Mani was just 5, but nearly 30 years later, Marley still looms large in his life, as seen in Ky-Mani’s new memoir, “Dear Dad” (Farrah Gray Publishing).

“I told my story from my heart and soul. After writing the book and reading over the first edit, I didn’t realize some of the stuff I had bottled up inside of me. So this book, for me, became therapy,” Ky-Mani said. “If I was to follow in my father’s footsteps, then what would they say? ‘Oh, he’s trying to be like his dad.’ Then if I take a different path, they say, ‘He’s supposed to be like his father.’ So you can’t please everybody. I just have to be true to myself and true to my art and do what comes naturally to me.”

“Dear Dad” is an arresting narrative of a son who was locked out of his iconic father’s estate after his death. Ky-Mani and his mother Anita Belnavis left Jamaica for the United States, where he was forced to survive the poverty-stricken, predator-infested streets of one of Miami’s most violent ghettos, Liberty City. Ky-Mani was initially estranged from his siblings and cut off from any financial benefit by the Marley estate executor.

From that crucible came the Ky-Mani Marley you see today – musician, actor, author, philanthropist and a father himself. He has recorded four studio albums (ranging from reggae to hip-hop), was nominated for a Grammy Award, performed to sellout crowds (one concert was beamed live to 36 countries), and has been cast in several major feature films, including “Haven,” which starred Bill Paxton and Orlando Bloom. Ky-Mani and his good friend Julian Lennon were jointly named Philanthropist of the Year by Prince Albert II of the Monaco Foundation, Better World Awards.

Some of Bob Marley’s words echo through the years with new meaning for Ky-Mani: “The harder the battle, the sweet of jah victory” … “One good thing about music, when it hits, you feel no pain” … “Don’t forget your history nor your destiny.”

“Dear Dad” is available online and in bookstores everywhere and online at Amazon.com

* The product for this review was provided to us free of charge for the purpose or product testing. This does not effect our opinion of the products in any way. We only write about products we personally like and use, regardless of how they were acquired.