It’s true that Barbie has faced some post-feminist backlash, but I have a soft spot for her. I remember how my sister Grace and I found our mother’s old Barbie clothes– still pristine in their early 60s cases. We oohed over Jackie Kennedy-inspired sheaths and fur-trimmed opera capes, and Barbie made us feel that growing up would be a glamorous adventure.

Well, I never got that pink convertible, but now that I’ve acquired a slew of my own sophisticated sheath dresses, I was quite intrigued by an invitation to the launch of the tokidoki Barbie.

In case you’re not familiar, tokidoki is an apparel and lifestyle brand that “…has amassed a cult-like following for its larger-than-life characters…  This innovative company has become known not only for its eye-popping design and collectible characters but also for its megawatt partnerships with the likes of … LeSportsac, Hello Kitty, Sephora… and many others.”  There are currently three tokidoki boutiques (Milan, Los Angeles, and Santa Monica) as well as a thriving online business.  I’d characterize the overall look of tokidoki as alterna-cool with a strong Japanese anime influence.  So hardly what you think of when you think of Barbie, right?  Well, that’s where words like “limited edition” and “collectible” come into play.  And the result is interesting: 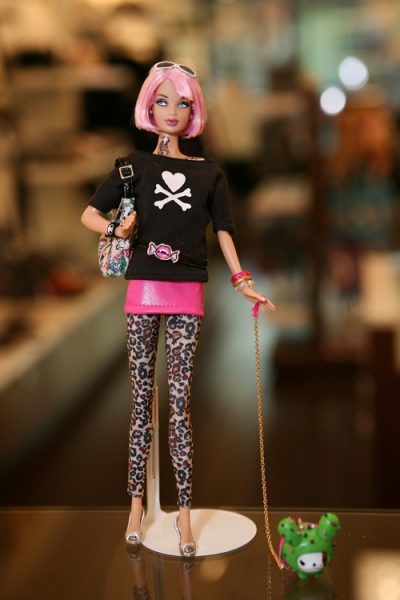 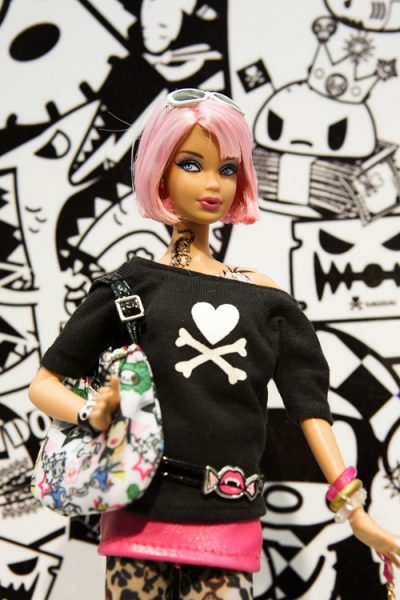 Certainly not my mother’s Barbie, and I like her.

I had the opportunity to speak with tokidoki creator Simone (Italian so it’s “SEE-moh-nay) Legno about his process designing the doll.  He worked closely with Mattel and drew on his past experience collaborating with Sephora to select everything from Barbie’s wardrobe and accessories to her hair, make-up, skin tone, and body art.  (Yes, this Barbie has tattoos.)  The end result features brand signatures, including Barbie’s tokidoki tote and tee as well as her cactus-clad canine.  When I asked him about his inspiration, he used words like “sexy” “fun” and “modern.”  Well, yes, I’d say he succeeded.

Simone has such an appealing, open nature that I really enjoyed talking to him.  Maybe it’s the whole Italian thing, but he speaks about his creative process in a remarkably unselfconscious way that I found both admirable and endearing.  For example, when I asked why Barbie’s little dog (who happens to be one of tokidoki’s trademark characters) is dressed like a cactus, he explained that because the dog is vulnerable, he dresses himself in armor to deal with the world.  Pretty rich stuff for Barbie.  Here’s Simone in action: 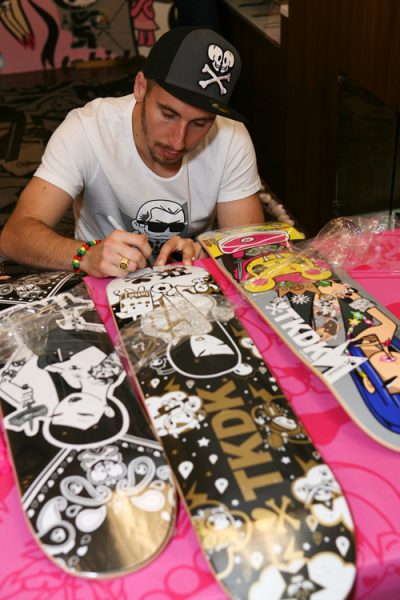 Interestingly, a little controversy has developed over the tokidoki Barbie, specifically her tattoos, with some parents arguing that she sets a bad example for their children.  My opinion?  Well, first I have to say that with a $50 pricetag, this is clearly a collectible rather than a gift-for-a-five-year-old kind of Barbie.  Other than that, I’m just relieved I can file that issue under “Stuff I Don’t Have to Worry about Since I Have a Boy.”  Since tattoos aren’t part of my personal style, though, I can sympathize with these parents a bit.  However, I certainly don’t look down on either people or dolls who have them.  And while it’s true that my sister and I loved Barbie’s fashion when we were little, I suspect that any little girl who is intrigued by tokidoki Barbie’s look is even more influenced by her mother’s fashion sense.

At any rate, it didn’t slow this Barbie down.  She’s already sold out!  But with another limited batch coming in November, I suggest you head to barbiecollector.com (if only to check out some wild Barbies) and also take a look at tokidoki.it for a collection of Barbie-inspired tokidoki apparel.

So what do you think?  Do you like the looks of tokidoki Barbie?  Do the tattoos bother you?  And how are you feeling about Barbie in general these days?

All photos by ©Ryan Miller/Capture Imaging.

This website uses cookies to improve your experience while you navigate through the website. Out of these, the cookies that are categorized as necessary are stored on your browser as they are essential for the working of basic functionalities of the website. We also use third-party cookies that help us analyze and understand how you use this website. These cookies will be stored in your browser only with your consent. You also have the option to opt-out of these cookies. But opting out of some of these cookies may affect your browsing experience.
Necessary Always Enabled
Necessary cookies are absolutely essential for the website to function properly. This category only includes cookies that ensures basic functionalities and security features of the website. These cookies do not store any personal information.
Non-necessary
Any cookies that may not be particularly necessary for the website to function and is used specifically to collect user personal data via analytics, ads, other embedded contents are termed as non-necessary cookies. It is mandatory to procure user consent prior to running these cookies on your website.
SAVE & ACCEPT
5 shares