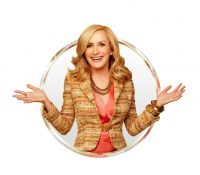 I was fortunate enough to be given the opportunity for a phone interview with actress Angela Kinsey, best known for her role TV’s Emmy award winning comedy “The Office”.

She is also in Clairol’s Nice ‘n Easy commercial as “Gigi” – your “Guardian Girlfriend” helping you to keep dark roots at bay! Ms. Kinsey was kind enough to answer a few questions for us at The Fashionable Housewife. She’s sounded like such a down-to-earth person and like many of you, she is also a busy mom.

Marie: Angela, what made you decide to be a part of the Clairol Nice ‘n Easy Campaign?

Angela: I grew up in Indonesia and my mom used to stock up on Clairol products to bring there so we’d have them. She did my hair during college and throughout my youth growing up. We’ve always used Clairol because it’s accessible, inexpensive and a really great product.

Marie: Do you have any favorite hair coloring tips you could recommend for those of us that color our hair?

Angela: First off I would leave the ends alone and concentrate on the roots. To extend the color, trying washing your hair every other day or longer if you can go without it – wear a ponytail if you must. I also deep condition once a month and I also use Aussie 3 Minute Miracle. I basically try to use products that are accessible in drugstores or stores like Target. I’d rather spend my free time with my baby than sitting in a salon, which sometimes can turn out to be a long commute, so Clairol is great for me and like I said, I’ve been using it for years.

Marie: What would you say are your top 3 beauty product must haves – those items you’d take with you if you were stranded on a desert island?

Angela: Naturally, I’d take Clairol so I can touch up my roots; can’t have roots showing on a desert island! Second would be Lancome Juicy Tubes and third would be Oil of Olay Moisturizer.

Marie: So, what’s it like being on The Office – it must be interesting and exciting!

Angela: It’s the most fun and best job I’ve ever had – it’s like lightning in a bottle. It’s a very family like atmosphere and everyone is a great. I’m very thankful to have such a great job.”

Angela: Ladies, if you have a zit and it’s at the beginning, you know, when it’s big and pulsing, take an aspirin and make a paste of it with water and apply it at the beginning of the zit and leave it on and the next day the swelling will be gone!!”

Thanks to Angela Kinsey for taking time out of her busy day to chat with me! And thanks for the great tips!

Previous Post: « Trend Alert: Elephants For Good Luck
Next Post: How To Wear Over The Knee Boots for Fall 2009 »