Gisele Bundchen was recently interviewed by Harper’s Bazaar where she suggested that breastfeeding become a mandatory, “worldwide law.”

Unless you live under a rock, I’m sure you already heard about this… Her comments have apparently sparked a massive outcry against the supermodel mom. For what reason? I can’t really figure it out. Maybe it’s because I’m a lactivist and support breastfeeding, but I didn’t misunderstand Gisele’s comment at all. Seems as if most people took her comment quite literally and became outraged at the thought that women wouldn’t be given the right to choose to feed their infant’s chemical filled formula instead of breastfeeding them. Oh the humanity!

In the controversial interview, Bundchen said, “Some people here (in the US) think they don’t have to breastfeed, and I think ‘Are you going to give chemical food to your child when they are so little?’ I think there should be a worldwide law, in my opinion, that mothers should breastfeed their babies for six months.”

After reading the comments left on USMagazine.com article about the subject, I am appalled at the ignorance and stupidity of the general public! Talk about “holier than thou”… WOW. I usually tend to keep to myself and not get involved in controversial issues, especially in public forums, but being a mother and breastfeeding advocate, I couldn’t turn away from this one…

I think it’s awful for other women to talk badly about other women, especially directly. Getting on forums, blogs or other public “soapboxes” and directly attacking another person about their opinion and feeling “safe” to do so because that person you are attacking is a celebrity, is just sooo…. disgraceful.

If you put Gisele down because she only gained 30 pounds during her pregnancy, then you’re just jealous.

If you put her down because she said her labor and delivery was pleasant and “didn’t hurt at all”, then you’re either uneducated on the subject or obviously didn’t have a positive birth experience.

If you put her down because she said “Breastfeeding should be a law”, then you are completely missing the point of what she was trying to say. On purpose.

I really and truly do not believe that she ACTUALLY meant is should a “law”. Like a “go to jail if you don’t do this” law. Obviously that would be stupid… I think people are completely missing the whole point and that is how extremely important breastmilk is for infants. It’s an undisputed fact.

What appalled me the most was the comments about Gisele making the women that “can’t breastfeed” feel bad about themselves. Um, hello? Again, complete lack of understanding on the subject. Unless you have had a double mastectomy or have gotten breast implants, there are only like 3% of women that physically can not breastfeed.

I’m not counting the ones that CHOOSE not to breastfeed because they are taking medications, need to work outside the home and “can’t” pump while they are at work, or the women who adopt. (I personally KNOW women that have chosen not to breastfeed for those specific reasons.)

There is a HUGE difference between deliberately choosing not to breastfeed and being physically incapable.

The Centers for Disease Control and Prevention (CDC) says that in 2004, due to mounting evidence that breastfeeding offers significant lifetime benefits to children, 74% of American women who gave birth breastfed their infants for at least some period of time. This almost reaches the government’s target of 75%. Unfortunately, most women did not continue breastfeeding beyond the first month.

The American Academy of Pediatrics recommends that women exclusively breastfeed their infants for the first six months, and then recommend that they continue breastfeeding at least through the first year as other foods are introduced. Among infants born in 2004, the rate of exclusive breastfeeding through the first three months after birth was 31%, shy of the government’s goal of 60%, and through six months was 11%, below the government target of 25%.

The 25% of women that chose to feed their infants formula instead of breastfeeding, I’m sure 99% did not make that choice because they were physically unable to breastfeed. Yes, breastfeeding can be difficult, uncomfortable, painful, inconvenient and even bothersome, but it is VERY rarely physically impossible… “Low milk supply” is a very common excuse to not breastfeed, but having personally experienced that myself and still continuing to breastfeed for 17 months (despite the difficulties, stress, pain, emotional turmoil, exhaustion, etc) I know it’s all too often a lack of understanding, effort, knowledge and support and not an actual supply issue.

Please do not misunderstand me… I’m not speaking out against women who choose to feed their babies infant formula. I’m sure they have their reasons and justifications for their specific situation. The sad truth is most women don’t choose formula because they think it’s what is best for they children… I understand there are circumstances where women “need” to use formula (I wrote “need” in quotes because there is such a think as a milk bank.) but what saddens me is the number of people who just choose not to because they don’t feel like it, regardless of what’s best for their babies.

I think Gisele’s comments are being misinterpreted. I believe she’s merely frustrated with the mother’s that simply choose not to breastfeed without even trying because they don’t want to breast feed in public, they think it will hurt, they don’t feel like it, they think formula is more convenient, etc etc etc.

Did anyone ever stop to maybe picture Gisele laughing and being facetious when she said “I think there should be a worldwide law” ?????

“A newborn baby has only three demands. They are warmth in the arms of its mother, food from her breasts, and security in the knowledge of her presence. Breastfeeding satisfies all three.” ~Grantly Dick-Read 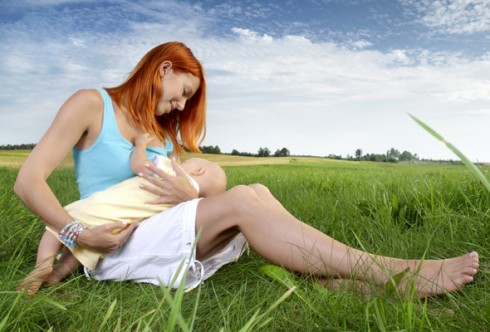 I believe that Gisele’s entire point was that breastfeeding is best and that she’s saddened by the number of people that carelessly choose to not breastfeed because it’s inconvenient or unappealing to them. I don’t think she meant to make anyone feel bad or scorn the few women that physically can not breastfeed.

The US has sexualized breasts so much that we’ve forgotten that their REAL biological purpose is to provide nourishment for our children. That’s what breasts are made for! I really think that was the point she wanted to make. In hindsight, I’m sure she wishes she had stated things a little differently, but in reality, you can’t please everyone… As a celebrity, it doesn’t matter WHAT she says… someone is going to take issue with it and call it out as politically incorrect. That’s just the way most Americans roll……..

More Breast Feeding Could Save 900 Babies a Year

The lives of nearly 900 babies would be saved each year, along with billions of dollars, if 90 percent of U.S. women breast-fed their babies for the first six months of life, a cost analysis says. Read more >>

So I want to know what YOU think about this subject. I know we have a lot of readers who are mother’s and I want your take on this whole subject.

Should all mothers breastfeed their children? Did you breastfeed your child? Should there be more support for mothers wanting to breastfeed? Is there too much pressure on new mothers to breastfeed?

Omggggg you guuuuys! I’m so excited that Caraway

Omggggg you guuuuys! I’m so excited that Caraway