My friend recently found out she was pregnant for baby number THREE and she’s hoping to try cloth diapers this time around, to help save money. She was concerned that she was wasting a ton of money on disposables and didn’t think they were very good for the environment either! So, of course, I suggested gDiapers! I have had such great success with them and they are really easy to use for people who are new to cloth diapering.

She’s right about the wasted money AND the negative impact on the environment. (You can read all about the “yuck” of disposable diapers here.) The biggest thing to take into consideration is that disposables are made from plastic. One plastic diaper equals 1 cup of non-renewable oil. And we all know how excited everyone is about the rising cost of oil these days, right?! Yeah… I’d rather put that oil in my car than make a diaper with it.

Another reason why I chose cloth diapering is because once I tried it, I never wanted to go back.

I recommend gDiapers because they are the easiest cloth diaper system around. I have tried other cloth diapers and nothing compares to gDiapers. You have the flexibility to use gCloth inserts OR disposable/compostable/flushable gRefill inserts. 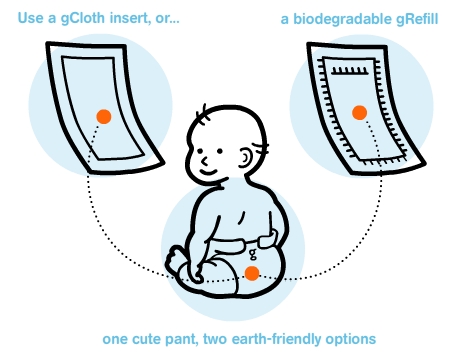 I almost always use the cloth inserts, unless I am going to be out for the day, then I just use the disposable ones and flush them in the public rest rooms or dispose of them in the nearest garbage can. I personally don’t like dealing with a poopy cloth insert when I’m out and about… but if it happens, I just stick it in my gWetbag and deal with it when I get home.

One of the thing I love about gDiapers that sets them apart from the rest is less laundry than most. gDiapers are made up of three parts… The gPants (comes in 4 sizes and lots of different colors), the gSnap in Liners that act as a buffer between the insert that gets wet and the outside gPant that doesn’t get wet (usually!), and the gCloth or gRefill insert.

Here’s how they look…. 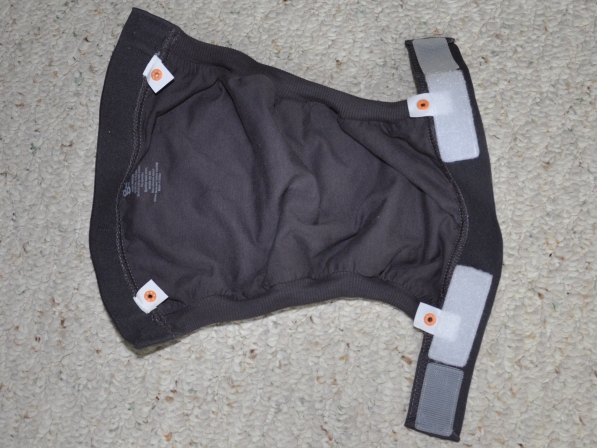 gPant with gSnap in Liner 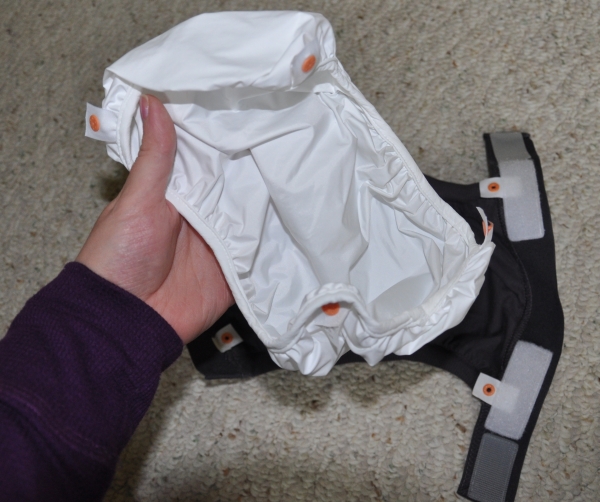 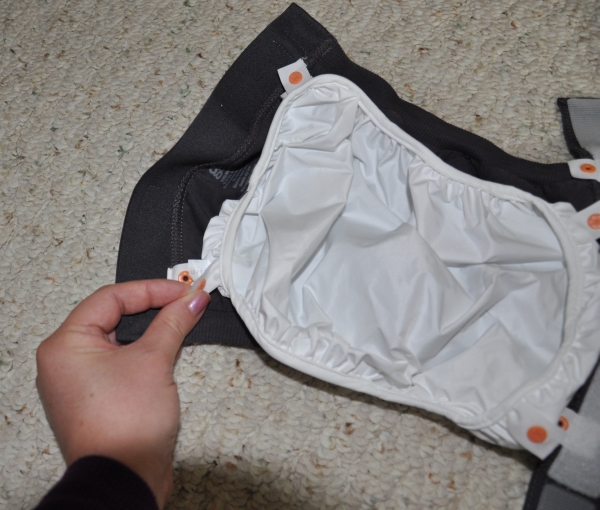 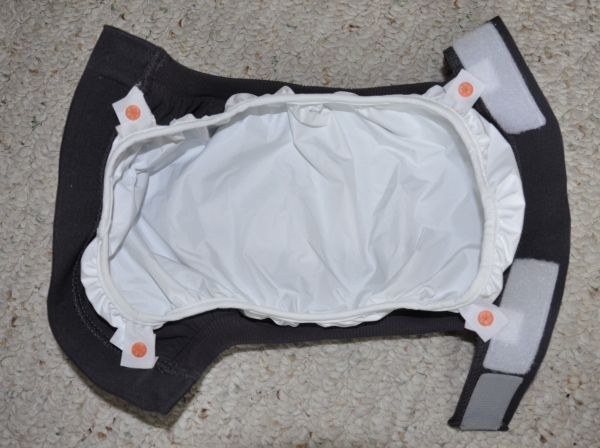 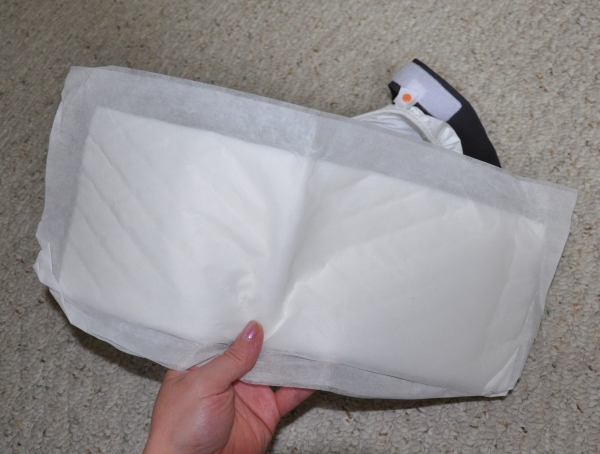 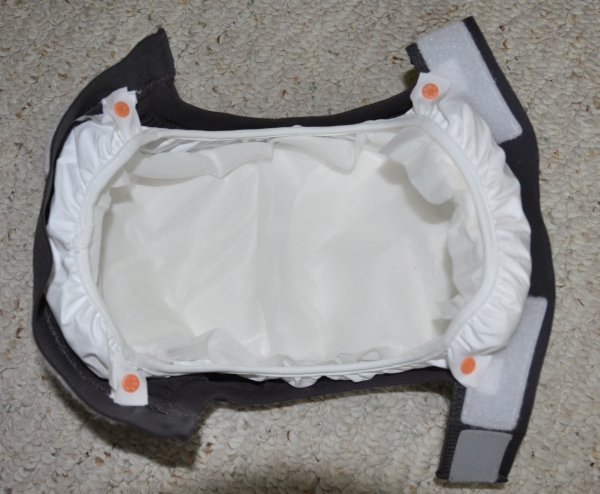 You do the same thing with a gCloth insert too. Just lay it flat and then pop the corners under the elastic sides of the liner and smooth it out.

Then just plop it under baby’s butt and attach the velcro sides. Here is what a gDiaper looks like assembled sans baby butt. 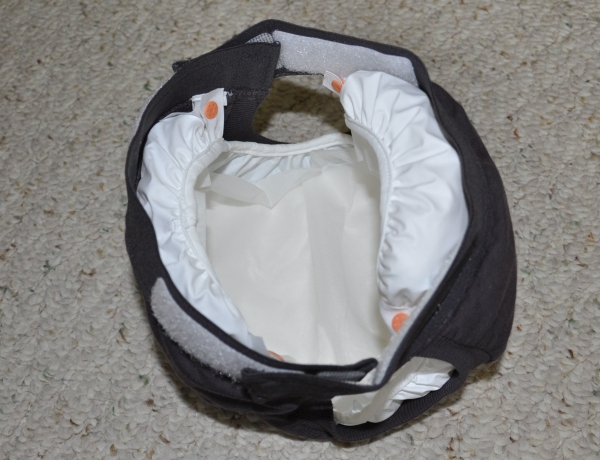 And here is what it looks like on the baby butt…. 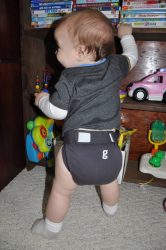 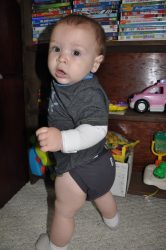 I prefer using the dark colors like gray, black and brown because you can’t see the stains if the diaper leaks… And it does once in a while. Especially on the younger babies. My boy (above) is 9 months old now, weighs 22 pounds and wears the size medium gPants. We don’t get leaks anymore as long as we change him as soon as he poos.

He also wears his gDiaper in the pool with a cloth insert… Better than wasting money on the disposable swimmy diapers. And cuter too! 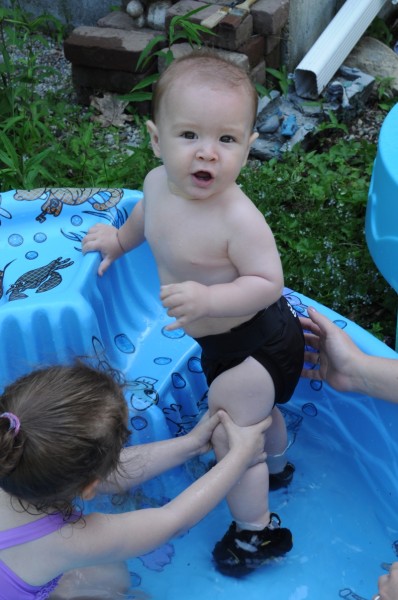 (Big sister is helping him stand up… lol)

In conclusion, I definitely recommend gDiapers. They are the easiest cloth diapers to use, versatile, affordable, virtually leak free, low mess and just all around the best cloth diapers I’ve used.

If you decide to try gDiapers and you’re currently pregnant, I recommend getting the gBaby Bundle for Newborns. The bundle starts you off with 12 teeny tiny gPants for your little newborn. I tried these with my little man right after I gave birth to him, at home, and they were great! Nice fit, super soft, no leaks. The bundle also comes with 6 small gPants to get you started on the real gDiapers after the first month or so when baby gets to be 12 pounds or more. You can use the small size gRefill liners in both the tiny g’s and the small gPants. The tiny gPants are pretty little so if you have BIG baby’s (9 or 10 lbs +) then you might want to skip the tiny g’s and just get a very small pack of Huggies Pure & Natural disposables to use for the first couple days while baby’s poop is incredibly dark, thick and near impossible to wash out. (http://en.wikipedia.org/wiki/Meconium) Then switch to the small gPants once baby has reached around 10-12 lbs. My little man was 8.5 lbs when he was born and outgrew the tiny g’s in less than 2 weeks……

If you want to start with gDiapers and your baby is 3-9 months old, start off getting the Everyday G’s 6 pack for $79.99. You get three orange pants and three green pants. That’s only a little more than $13 for each gPant instead of the regular $17.99 per gPant. Then get 1 pack of small gCloth liners (6 liners) and 1 bag of small gRefill liners. The 6 gCloth liners will have you doing 1 load of laundry a day, but it’s good to start out with to see if you like using cloth. If you don’t, then you can easily sell them on eBay and just use the gRefills which you can

I use the gCloth Liners on the gCloth inserts so poop is easily disposed of without having to rinse out the cloth insert before throwing it in your diaper pail. I’ve also found that this preserves the cloth inserts and makes them last a lot longer so you can reuse them if you decide to have more children. (Or want to sell them on eBay when you’re done.)

For older babies that are crawling and early walking, you’ll probably need size medium or size large. My son is 9 months old, 22 pounds and just about ready to go from the medium into the large. We use around 6 gCloth inserts a day and maybe 2 or 3 gPants (depending on the mess). My boy isn’t a very heavy wetter, so as long as I change the cloth liner every 3 hours or so, we don’t get any leaks or dampness at all. The gCloth liners are AMAZING. I have regular cotton prefolds and I also occasionally use FuzziBunz liners (3 liners for $4) when I run out of gCloth’s. They are cheaper but don’t work nearly as well. Good for doubling up for overnight or just as back up in between loads of laundry…

gDiapers now come in size XL (for 35lbs +) so your big toddler can enjoy cloth diapers before graduating to the big kid undies. We aren’t to this stage yet so I can’t vouch for how many gCloth liners or gRefill liners to use, but I would imagine it would really vary and depend on your little one’s ‘going’ habits.

If you have any questions about gDiapers and my personal experience with them, leave a comment or send me an email at sarah@thefashionablehousewife.com You can also find the answers to almost all of your questions at the gDiapers website http://www.gdiapers.com

Previous Post: « ShopRunner Enters the Fashion Deal Arena
Next Post: Celebrate the 4th with Your Red, White and Blue »