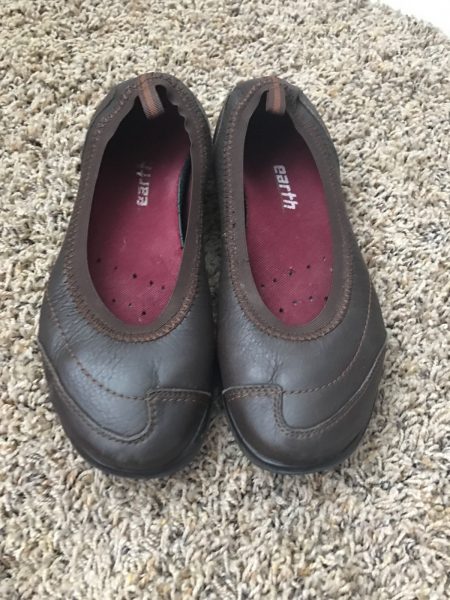 Double OUCH!!!
My not so positive review of Earth Aspire shoes

Even though I love heels, there is a need in my line of work for flats. I actually love flats. They were my shoe of choice for the longest time, and they are my default shoes for my non-work days. However, not all flats are created equal. Just because a shoe is a flat does not mean it will be comfortable. Nor does it mean it will be useful for what you need it. At my new venue I do considerably more standing and walking around than I have previously, and as such, I have been trying different flat shoes to accommodate.

The first pair I tried was a carry over from my previous employment, and I found out quickly that they were not sufficient. The second pair I tried was a slightly modified version of the first, but still managed to blister and hurt my feet. So for the third pair, I decided to do some research and splurge a little on some better quality shoes. I looked up many different brands and finally, based on a tip from someone, settled on the Earth footwear brand.

From the website, I found that these shoes were made from special, light weight, form fitting material, called BioFit, and they also had a special “negative heal technology” called Kalsø. This is supposed to strengthen and tone the legs while promoting a “natural walking motion”. Looking through the website a found that these shoes look better than some of the other toning shoes I’ve seen, but they are still not the most stylish shoes ever. That aside, I decided to go to one of internet stores that sell the shoes (they’re not for sale on the actual website) and look at some of the reviews.

After looking through the selection and narrowing them down to what I was looking for, I settled on the Aspire

. It was a basic slip on shoe made from soft leather in a variety of colors (I got the Mahogany Butter Calf

). Another reason I chose them, they are a part of the Kelsø Lite collection, which are even more lightweight and flexible than the originals. I read the reviews on Zappos.com, and based on those I decided to give them a try.

My first impression when I got them was that they were kind of tight, and that the back dug into my heel. I knew that I needed to give them a few wears to break them in, and since they are leather I assumed they would stretch and mold to my feet. I put Band-Aids on my heels right away to avoid blisters and set off for a normal day at the office. They were actually quite comfortable to walk in. The negative heel took a bit getting used to, and my calves were a little tight for the first hour that I had them on, but really, they seemed like they might work out. The biggest complaint from that first day was that they rubbed my heels even with the preventative Band-Aids, and my pinky toes were developing blisters. I didn’t wear them the next day to give my feet a chance to heal, but I wore them the day after that with the same results. I knew that it would take a bit to break them in, and I really wanted them to work, mostly because they were expensive, but also because I really need flats that don’t kill my feet. I had a weekend with two big concerts coming up about two weeks from when I got the shoes, so I figured if I stuck to my day on/day off pattern I would break them in by then. NOPE!!!

The first concert was on a Friday, and I actually didn’t wear them because I wasn’t sure that I could wear them two days in a row, and I wanted to save them for the bigger concert on Saturday. Well. Friday went well, but when I arrived on Saturday with my Earth Aspires on, I knew I was in trouble. For starters, just an hour into work, before the doors even opened, I had to go to the medic and get them to tape up my heels because they had already rubbed blisters onto them. It didn’t help that I forgot to put Band-Aids on to begin with, but still, I shouldn’t have blisters after an hour.

Then, as the night wore on, I became more and more aware of the pain in my feet. My pinky toes were on fire from blisters that even Band-Aids and tape couldn’t relieve, and the bottoms of my feet hurt worse than if I’d walked around Disneyland for two days in flip-flops. The worse part was that my calves were starting to cramp to the point where I actually couldn’t walk without limping.

By then end of the night I was so upset that I was in tears on the way home. The next morning when I woke up, I literally COULD NOT WALK because my calves were in knots. I had to have someone massage the knots out before I could even limp around. That was Saturday. It is now Monday and I am still recovering from my blisters, and my calves are still so tight that I decided to skip my morning work out to avoid more injury.

I fully intend on writing to the company about my experience with these shoes, and have already started looking for alternatives to wear to the concert I have in two weeks. Though I had a miserable experience, I wouldn’t write the Earth brand off completely, as they could work out for someone who doesn’t have to walk as much as I do. They have several open back models that would not cause blisters, and I’m sure once my calves stop aching I will enjoy how toned they’ve become from just one day.