The subject of breastfeeding in public has been coming up on my Facebook newsfeed an awful lot lately and the debate it getting hot! Being a mom of two that breastfed, I certainly have my own opinions but I’m wondering what you ladies think… 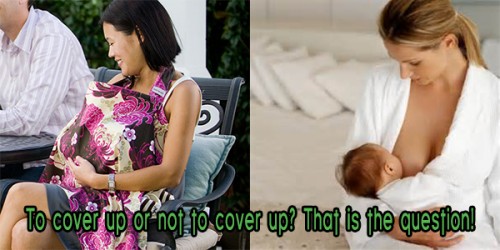 I breastfed my two babies till they were over almost two (although of course nursing after 12+ months was usually only at night so never had to take place out in public) and I would never just whip my boob out in front of people and put on a show. Yes I nursed in restaurants, stores, malls, themeparks, etc and I did not go to a bathroom to do it. But guess what, nobody ever saw my boob except my baby and I didn’t use a cover or a blanket 90% of the time!!!!!!!

If you wear nursing tops or a loose shirt on top of a nursing tank, it’s very easy to nurse a baby discreetly and modestly. I’ve only been asked to cover up ONCE and it was from someone who thought it was inappropriate for me to nurse my infant in front of her 3 year old son… WHY? I don’t know!!! Considering at no time was my breast actually exposed or showing and considering that child had been breastfed up until less than a year earlier, I can only conclude that it was just that person’s “mood” that day. In my opinion we should teach our children that breastfeeding is NORMAL and GOOD and that’s what boobs are FOR! But that’s another issue entirely… Besides that one time, I’ve never had anyone ask me to “cover up”, go elsewhere or give me dirty looks, even on an airplane. Why? Because no one could tell what I was doing! Just looked like I was holding a sleeping baby.

Do I think people should be offended by women breastfeeding? NO.

Do I think women should be intimidated into nursing in bathrooms or worse, not at all? NO.

Should people be offended or irritated by seeing a boob in public? Well…. people don’t seem to mind all the boobs on store ads or walking down the street in a low-cut cleavage-enhancing top, so why be bothered by seeing a hint of one that is half in a baby’s mouth?! Double standard here. If we are going to demand modesty of nursing mothers than we should go into every Victoria’s Secret store and complain about their ads in the windows too. Right?

In short… Babies have to eat, that’s what God MADE boobs for and you see a LOT more boob-age walking by a Victoria’s Secret in the mall or looking at just about any swimsuit on the beach, then you see when a mother is nursing her baby. Facebook is notorious for having a double standard here where extremely offensive and practically pornographic pictures are strewn all over facebook, but God forbid if a mother posts a picture of herself nursing her newborn. All hell breaks loose!

From what I’ve seen, mother’s nursing babies are a lot more “considerate of others” and have more “manners” than most women walking down the street in skimpy clothing or wearing a swimsuit at the pool. Nursing mother’s aren’t purposely trying to expose themselves (99% of the time unless they are trying to make a point…) however most women these days (esp young ones) look to expose themselves whenever they can and no one bats an eyelash about that it seems. Why are we holding nursing mother’s to a different standard than the rest of the female population that expose themselves for sexual purposes rather than utilitarian purposes? Severely overweight people dressing super skimpy and completely immodestly in public…? To me, that’s rude and inconsiderate of others!!! New mom trying to get the hang of nursing showing a lot less boob than can be seen in a Victoria’s Secret ad? Not so much.

Am I going to go participate in a public “nurse-in” to make a point? Of course not, because that’s just stupid!!!!!!!!!!! Am I going to whip my boob out and leave it on the table in a restaurant for everyone to look at in the name of “I’m nursing so you shouldn’t be offended by this here boob!” hahaha NO!!!!!!!!!!! But I’m not going to get my knickers in a twist about mom’s nursing their babies in public without a cover. Of course there is a big difference between “not covering up on purpose” and leaving your entire boob out of a shirt for everyone to look at JUST to make a point (which honestly I have NEVER seen any nursing mother do, only heard about it) and just being a normal mom just feeding your baby.

There are plenty of gorgeous, functional and easy to use nursing covers readily available these days. You can also find nursing clothes in just about any store now, including Target. It is easier than ever to breastfeed your baby in this day and age, so why is it still such a controversial subject?

In my experience, almost all moms are modest about breastfeeding in public and very, very few are looking to “make a point” and be non-discreet.

Most of the time when you hear stories about women being asked to nurse elsewhere, (like that story of the woman on the American Airlines flight) it’s NOT because they aren’t being modest!!!! It’s because some people have hangups about it and don’t “get” that breastfeeding is what boobs are intended for and are hell-bent on making nursing mother’s uncomfortable so they won’t nurse in public at all.

Be modest? Yes of course. Be afraid to breastfeed out in public because one lone idiot might be offended by the act? Not so much.

I think the main thing to remember here, which my good friend and nursing mother of TWINS, so kindly pointed out – “HAVE SOME COMMON SENSE PEOPLE!” Obviously some people are going to be offended just “thinking” about it, even if you have a giant blanket covering you and nothing is showing. If you can avoid offending people, do so, because why cause unnecessary conflict? But on the flip side, don’t rule out breastfeeding all together just because someone might take offense to it. Like my friend suggested… just use common sense.

What are your thoughts on the subject, ladies? Are you offended by seeing women breastfeeding in public? Do you think women should cover up while nursing?

Previous Post: « Most Fashionable Phone Cases for Your iPhone
Next Post: Must-Have Essentials for “That Time Of The Month” »