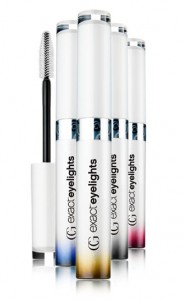 It’s a good mascara, but it doesn’t really make your eyes “pop”. I just didn’t get that effect from it…

“CoverGirl Exact Eyelights was created to give women a subtle color enhancement that complements your total beauty look. The difference is subtle, but compared to bare lashes, eyes appear four times brighter.”

Of course it’s better than using no mascara at all, but who doesn’t wear mascara? Seriously!

Maybe it’s just me… The mascara for brown eyes is just a black color. I would be interested in knowing how the one for blues eyes works. Or maybe the ones for hazel eyes, which appears to be a pretty purple/plum color.

As mascara, this is actually pretty great. No clumps or lumps. So it’s a good formula, but I don’t get the eye brightening affect it promises. After googling for reviews of the mascara, it looks like I’m not the only one who doesn’t get the promised results.

Hear me out… I LOVE CoverGirl. You ladies know I swear by my CoverGirl LashBlast Mascara in “Black”

. I seriously won’t leave the house without a coat of this stuff on my lashes.

products I swear by, would endorse, and rave about all the time. But this, my friends, is not one of them.

Have you tried this mascara? What did you think?