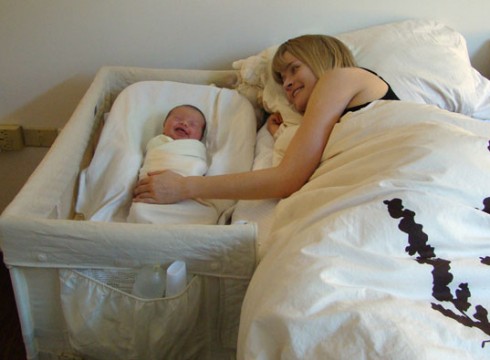 It turns out attachment parenting isn’t scandalous at all, though some still consider it to be. In my opinion, it’s the healthiest form of parenting for a child and it’s how I am raising my second son, Daniel. But, I have still received criticism from friends and even some family members for my choice.

Consider the history of attachment parenting…

During World War Two when Americans were stationed in Okinawa, they discovered a very curious phenomenon. At the time, the people of Okinawa had no known incidence of mental health problems. Depression and anxiety disorders were unknown. This was a very happy culture, indeed. Americans took a closer look at how children were being raised, and they observed that babies were worn by mothers, and slept in mother’s beds, and were always with siblings or older family members. No one was ever alone and affection was liberally given to all children of all ages.

This observation coincided with a study by the WHO. In 1950, the World Health Organization sponsored a study called “Maternal Care and Mental Health”. This is the study which promoted the now-famous Harry Harlow to experiment with Rhesus monkeys in finding out the effects of maternal separation on infants.

The experiment went as follows:

“When the monkeys were placed in an unfamiliar room with their cloth surrogate, they clung to it until they felt secure enough to explore. Once they began to explore, they occasionally returned to the cloth mother for comfort. Monkeys placed in an unfamiliar room without their cloth mothers acted very differently. They froze in fear and cried, crouched down, or sucked their thumbs. Some even ran from object to object, apparently searching for the cloth mother, as they cried and screamed. Monkeys placed in this situation with their wire mothers exhibited the same behavior as the monkeys with no mother.” (1)

One of the most important findings of this study was that it contradicted the traditional advice of child-reading at the time, which was to limit physical contact with the mother. It was believed that too much physical contact between infant and mother would result in spoiled and needy children who would never find independence as autonomous beings.

It was also thought at the time that feeding was the most important factor in mother-child bonding, not physical affection. And this was also a time when formula companies were pressing mothers to formula feed and not even consider breast-feeding their infants. Breast feeding was considered vulgar by upwardly mobile society and formula was considered as the logical advance in feeding and it was also considered to be more nutritious than mother’s milk.

And so here we are today.

I heard on the radio the other day what seemed to be a comment meant to cause a stir, but perhaps not. The radio announcer was quoting a recent statistic that he heard. He claimed that if you consider the entire population of the United States, 100% of the citizens who live to be adults, will experience depression once in their lives. And that up to 50% of the population is at risk for depression at any time. Now, I have no idea where this radio announcer received his data, or which study he was quoting, but it was thought-provoking. And if it is indeed true, it might be good as a society to examine where exactly we are going wrong.

Now, I am going to switch back to the attachment parenting topic and connect it to the mental illness in this country. I think it can be said that there has been a contingent of the population that still equates physical affection and attention to the spoiling of the children. And sometimes these folks also believe in corporal punishment.

. I prefer the Ergo to the Bjorn and it’s also very fashionable. The fact that it comes in organic fabric is a plus. Here’s a photo and a link to their site: 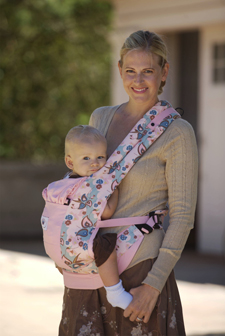 come in all different kinds of fabrics and your husband can wear one of the solid black of blue ones without feeling his masculinity is being diminished. Though, I prefer the pink one for myself. They can be worn on the front, the side, of the back, and also come with an attached hood for sun-coverage or napping. You can also use the hood to discreetly breast-feed baby in public. That’s a definite plus. My son Daniel loves riding around in it and seems to be very comfortable. I literally clean house and do dishes with him while he hangs out on my back and he’s all the more content for it.

Daniel is 16 months old and he still mostly breast feeds and he also shares our king-sized bed. Though, I do keep a crib as well at the bed side in case he were to roll off. I also use the crib as a play pen when I am getting ready for bed and need to put Daniel down. I keep a singing teddy bear in there as well as a few toys.

I don’t know if Daniel is calm due to his temperament or the attachment parenting. But, I can say he is an extremely contented, very social, happy and chubby 16-month old. He plays well on his own or with other children. He already knows about the concept of taking turns and he loves to share. Many people who have met him remark that they have never met a child as contented or as gentle as he is. I would say this is partially his base temperament, but I do also attribute it to the attachment parenting I practice. He knows he’s always safe and secure, and that I am always available to him, whether it’s to cuddle or to nurse. He knows he doesn’t have to cry himself to sleep at night, but that he’ll fall asleep in my arms and stay asleep there all night if he chooses to. I take him everywhere and there’s never a moment when I am unavailable to him.

Now, I realize this kind of arrangement would not be doable for many women, so I am not saying it’s for everyone. I am sharing my own personal observations and experiences with it.

I was in the grocery store one day and I said hello to the mother in front of me in line. Her 8-week old son was asleep in a front pack. I remarked what a cute baby he was and we talked a bit. She let me know that she was practicing a form of parenting that she stated to be Biblical. It was based on a book where children do not share beds and are taught to sleep through the night as early as eight weeks. She was so happy that she only fed her 8-week old at certain times and that he cried himself to sleep and slept through the night in a different room. She looked me in the eye and said, “Babies shouldn’t control you, you know”. I said I was glad that worked for her, but a silent shudder went up my own spine. In my own reading of the Bible it seems the mothers and babies co-slept, so I am not sure where this whole separating the child from the mother is Biblically based. I guess it’s just individual people’s interpretations, as many things are. And as this is also my own individual interpretation.

All I know is, even though some around me don’t approve, attachment parenting IS very much working for me and my family, and the result can clearly be seen in Daniel. I am just very grateful that I am in the position to have the time and energy to follow this parenting style. But, by no means am I saying it is for everyone, and I respect every woman’s decision and also situation in life.

I am glad we live in a society that has made many strides and we as women largely have the choice to raise our children as we see fit, and that in itself in a miracle. We have made strides from even a century ago– and now we have the freedom and autonomy to do as we see fit and follow our own path.

And whatever your path may be, I wish you well. I would also love to hear from other mothers what parenting style they follow and what works for them. I still have much to learn and would love to hear from you.