Filmmakers knew that a film like “Confessions of a Shopaholic” required brilliant costuming. Enter Patricia Field. 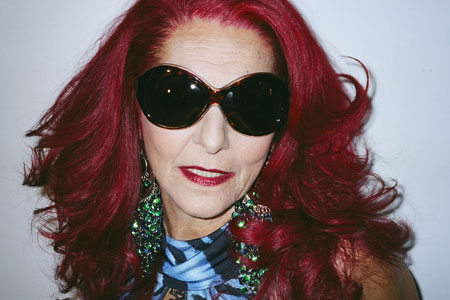 
“Patricia Field is one of the great costume designers,” says producer Jerry Bruckheimer. “She’s always been ahead of the curve, finding new designers and dressing our characters in ways that are unique, interesting, colorful and stylish.”

Field has been at it for more than 40 years, since opening her first boutique in 1966. Field is responsible for the noteworthy fashions behind HBO’s Sex and the City

“The story of ‘Shopaholic’ really appealed to me,” says Field. “It seemed like a fun, positive and entertaining project, which is my kind of movie. I love to entertain…it’s my approach to this business. I had never worked before with Jerry Bruckheimer, and that was a big draw. Jerry and P.J. Hogan were very positive about me working for them, which is very important.

“I’m a stylist,” continues Field, “even though in the world of costume design that’s kind of a dirty word. I create fashion as art, and I do that by means of collage. I mix old pieces, new pieces, dressy pieces with jeans, all kinds of mixtures. The world of costume design in the orthodox sense is about making the garment from scratch. But I feel that if we’re doing something contemporary, you’re at a disadvantage in trying to make garments when you’ve got the world of designers to choose from. Our film is about a shopaholic who goes around shopping all day.”

Field says she was inspired by the film’s colorful cast. “I always get my main inspirations from the actors and what they bring to their characters. I work with the actor to bring out what they want the character to be. Of course, I have my own ideas, and I share those, but in the end, it’s the actor who’s in front of the camera. I found Isla to be very flirty and fetching, with a twinkle in her eye. She’s petite and cute, but has a sexy Cheshire cat quality that inspired me to dress her in the way I did for the film.”

Enter to win tickets to see the movie >>

Isla Fisher enjoyed the costuming process as much as Field did. “It was so much fun creating Rebecca Bloomwood with Patricia Field,” says Fisher. “She’s such an amazing stylist with a unique vision. I wanted Becky to be adventurous and eclectic in her style, and also be the ‘Everygirl’ that we all relate to. It was a fun balance finding and keeping her young, bright and colorful, but at the same time high fashion.

“Becky is much more adventurous—stylewise—than I am and far more image conscious,” continues Fisher. “I’m much more of a jeans and T-shirt kind of girl.”

“Becky is a happy girl,” says Field. “Although she has a conflict with debt, she’s essentially a positive person. Isla is very animated, funny, sexy, pretty and young, so it was an ideal situation for me. Also, I knew that Jerry Bruckheimer wanted to use a lot of color in the movie, which was fine with me, because I love color. So the costumes for Isla as Becky reflect those qualities.”

Here’s some exclusive photos from the movie: 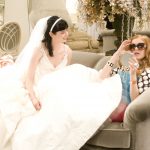 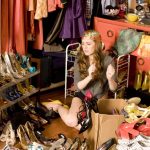 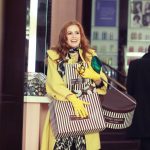 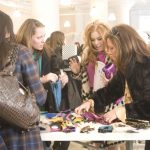 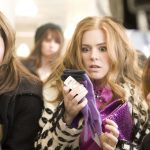 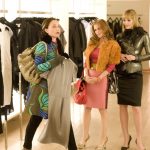 Ironically for a story set in New York, Field got several ideas for dressing Isla while on a business trip in Tokyo before the start of production. “While I was there, I shopped for Isla,” Field says. “Her petite size is perfect for the Japanese size range, and young fashion there is extremely animated and colorful. It was an opportunity for me to dress Isla in clothes that we haven’t seen before. The influence isn’t reflected in the fact that she wears clothes designed by the Japanese, but rather in the mix. It reflects the edge that you see in the Tokyo fashion scene.”

Reflecting her “collage” technique, Field adorned Fisher in fashion-forward and often startling combinations of clothing and accessories from some of the world’s most internationally renowned designers, including Balenciaga, Marc Jacobs

The other characters also received the full Patricia Field treatment, including Rebecca’s roommate Suze (Krysten Ritter). “In the story, Suze tries to tame Becky’s shopaholic tendencies, so it would have been easy to just make her plain,” says Field. “So I conjured up the idea of Suze being like a Williamsburg Girl—the neighborhood across the river in Brooklyn which has attracted a colony of young people. It’s young, artistic, a little bohemian and a little rock. I dressed Krysten in a mix of color and neutral—very eclectic—whereas Becky is just color, color, color.”

,” Field was determined to give Kristin Scott Thomas’ character of Alette Naylor her personal fashion stamp. “A woman like Alette is number one—she’s achieved her position after many years and has developed her own sense of personal style. Kristin’s wardrobe is very fashion acute. In one scene, she wears an elegant, neutral gown with this gorgeous necklace made of handmade wood beads, a one-of-a-kind accessory. We were trying to show that Alette had her 360-degree choices of what she would and could wear.”

As Alicia Billington, Leslie Bibb is physically the opposite of Isla Fisher’s Rebecca. Field chose a lot of black and neutral, “a kind of Cruella DeVille inspiration,” says the costume designer. Bibb says the wardrobe choice fit her character perfectly. “Alicia is a controlled, driven person, so nothing is left to chance. She works her ass off and everything is calculated, particularly her clothes. I put on Alicia’s outfits and was immediately in character. There’s an attitude that comes with wearing a four- to five-inch heel.”

The men received equal treatment from Field, although the lack of interest that Hugh Dancy’s character Luke Brandon shows in what he wears presented the costume designer with interesting challenges. “It’s much easier to do head-to-toe gorgeousness than it is to do ‘I don’t care,’” says Field. “For the first part of the movie, Luke feels that there are bigger things in his life that he’s interested in, and through the course of his relationship with Rebecca, he undergoes a little bit of a transformation, which has to be believable.”

For her more proletarian characters, John Goodman and Joan Cusack’s Graham and Jane Bloomwood, Field still found a way to dress them interestingly. “I went to the costume fitting with thoughts of being slightly eccentric,” says Cusack. “Patricia was so brilliant in making that eccentricity attractive and dignified in the way that she makes clothing art. She sees great dignity in clothes and style.”

Previous Post: « Need A Winter Pick Me Up?
Next Post: Calvin Klein Relaunches CK One And “We Are One” Campaign »