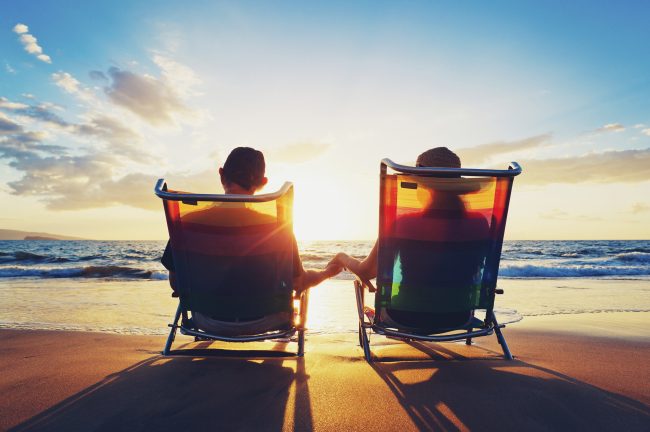 When the winter time blues strike, it’s always a good idea to hit the road for a change of scenery. Some prefer to ski in the winter, an option in Aspen and Stowe, while others look for the sandy beaches of Palm Beach or Key West. And, if you really want to escape cold weather, you can always escape the United States entirely for the exotic Seychelles.

Nestled in the Rocky Mountains, this Colorado skiing town is one the toniest winter getaways in America. Originally a silver boomtown, Aspen became known after World War II as a ski resort with some of the best slopes in America. The town was originally a bohemian paradise – think author Hunter S. Thompson and singer John Denver – but has seen an influx of wealthy international jetsetters since the late 1970s. They are drawn to the town’s four ski areas, the downtown strip of high-end boutiques, and a community that has become known most recently as a foodie haven.

Since its founding by steel magnate-turned-developer Henry Flagler at the turn of the century, Palm Beach has been the warm wintertime playground for the American elite. A tiny strip of land bordered on one side by the Atlantic Ocean and on the other by the Intracoastal Waterway (known in Palm Beach speak as Lake Worth), the island has some of the most opulent homes in America. The most famous is the Kennedy’s winter compound, which was left the family’s hands in 1995. Visitors typically stay at the world-renowned Breakers Hotel, which boasts a sandy private beach and a bevy of fine restaurants.

Known as the ski capital of the East, Stowe was one of America’s first ski resorts. Located in Vermont’s Green Mountains, the town boasts several ski areas – although none quite as treacherous as those in the Rockies – and ample opportunities for cross country skiing, snowshoeing, and other winter activities. Another point in Stowe’s favor? Amazing mountain vistas that inspired the von Trapp family – the real-life inspiration for The Sound of Music – to settle here after fleeing Austria. Today, you can stay at a lodge still run by von Trapp descendants and drink German and Austrian-inspired beer brewed on the premises.

Four hours southwest of Palm Beach, Key West is the yin to its northern neighbor’s yang. Long renowned as a “live and let live” bohemian mecca, Key West is home to a thriving LGBT community – witness the city’s high heel drop on New Year’s Eve – as well as beautiful vistas at the southernmost point in America. Visitors can tour Harry Truman’s Winter White House and see the home where Ernest Hemingway wrote many of his most famous novels. Key West also has an incredible dining scene, sandy beaches, and ample snorkeling opportunities. It’s also the perfect spot to use as a home base for an exploration of some of Florida’s lesser known keys.

Located in a remote corner of the Indian Ocean, the Seychelles are one of the favored getaways for the international elite. They are drawn to an island chain that is thought of as one of the last undeveloped places on Earth, famous for lush greenery and clear seas. The Seychelles are also known as an emerging eco-tourism hotspot; many of the nation’s resorts and lodges were built with sustainable components and are designed to minimize pollution and carbon footprint. All these factors have drawn some famous visitors: Prince William and Kate Middleton honeymooned here after their 2011 wedding. For the average American, staying in the same style as the Duke and Duchess of Cambridge might require some financial help: rooms on the islands can go for $7,500 a night or more.

Previous Post: « Gift Ideas: The Benefits of Giving the Gift of Wood
Next Post: Get Skin Winter-Ready With Premier Dead Sea »