Ever wonder who invented some of the things you enjoy most? If you’re like me, once in a while you just sit back and marvel, wondering “Gosh, who invented this?!”

Urban legend has it that Jennings Cox, a mining engineer that did some work in the little Cuban beach town of Daiquiri, invented the drink back in the early 1900’s when he ran out of gin while entertaining American guests. It is more likely that the drink evolved naturally due to the prevalence of lime and sugar in the area though. Either way, we know that it was created in the town of Daiquiri, hence the name! 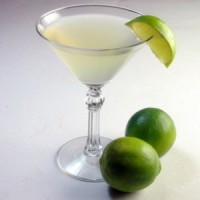 Originally, the delicious drink was served up on cracked ice packed tightly into a tall glass. You would then add a teaspoon of sugar and carefully pour it over the ice. Add the juice of one or two limes plus 2 or 3 ounces of rum. Finish by stirring with a long-handled spoon and serve. Later the Daiquiri evolved to be served with shaved ice and shaken, not stirred.

I’ve read that the Daiquiri first became popular back in the 1940’s when rationing during the war made vodka, whiskey, etc, seemingly hard to find. Because of Roosevelt’s “Good Neighbor Policy”, also known as ‘The Pan-American program’, made Latin America seem more fashionable, which helped allow us to trade and travel more easily with places like Cuba and the Caribbean. When rum became more easily obtained, rum-based drinks (once thought of as a drink for sailors and the like) also became somewhat fashionable, and we then saw the Daiquiri soar in popularity here in the USA.

This summer, rediscover the daiquiri!

Disclosure: The opinions expressed herein are those of the author and are not indicative of the opinions or positions of Bacardi