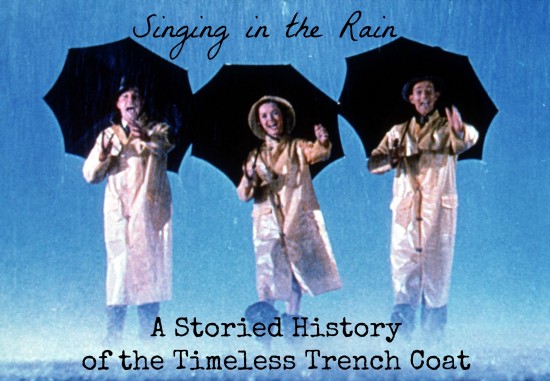 The one thing that cold weather does is present the opportunity to explore your coat collection. When considering fashion, some people fail to consider the outer garments, or at the very least, fail to give outer garments an appropriate amount of attention. Coats come in all types of styles and colors – allowing you to make some powerful fashion statements. One coat that is both – a classic and modern staple – is the trench. The trench coat has so many variations is style, length and color that it is probably the most versatile coat in the fashion world.

Everything has a beginning and this means that everything has a history. This article will examine the origin and history of the trench – exploring some of the changes as the style has evolved. Maybe you will see why so many people will be sporting macs during the colder months.

The trench coat’s popularity is widely due to its versatility and functionality – being an ideal layer garment for transitional weather. According to College Fashion, Thomas Burberry created gabardine, the original fabric used in trench coats. Gabardine was water resistant, highly durable and almost impossible to crease. Despite being virtually waterproof, gabardine was porous enough to allow breathing, making it as comfortable as it was functional.

The Origin of the Trench

As far as the trench is concerned, there is some considerable debate as to who invented the design. Burberry and Aquascutum have placed their claim to the original design. Burberry’s claim is based on the design that Thomas Burberry submitted in 1901, originally intended as an officer’s raincoat. In contrast, Aquascutum makes claim that they created the design a half-century earlier for officers of the Crimean war.

This is a debate that may not ever be officially settled, but one thing is certain, this design has had an immense impact on fashion. Both Burberry and Aquascutum manufactured trench coats in mass quantities for both world wars. This coat was ideal for the conditions experience during these conflicts. It had the capability of keeping the soldiers warm, it was extremely durable, and the pocket space provided the necessary space for the essentials that the officers needed on their person. According to OldMagazineArticles.com, an article in 1917 revealed that the demand for trench coats was so highly in demand – for military personnel and civilians as well – that it was difficult to meet those demands.

There are certain fashion pieces that earn the title of classic. What this normally means is that the piece transcends time. The trench coat definitely falls into that category. Over the years, the trench has experienced somewhat of an evolution, as each era has stamped their own touches to the design; however, it is still unquestionably recognizable.

According to the Gentleman’s Gazette, the trench coat was not a garment born from a sense of fashion; its invention and progressive development was the result of practicality and necessity. If the trench has to be placed into one category – which is quite difficult – it would more than likely be considered a rain coat.

The design and functionality of the trench creates the perfect fashion storm. Cold and clement weather does not have to mean the end of fashion. The trench brings an aura of style and class while providing the warmth and comfort that is necessary.

There may be an ongoing debates as to the true origin of the trench coat, Aquascutum has some strong arguments, and so does Burberry, but there is no debating the popularity and effectiveness associated with this versatile fashion piece. Although fashion was not an initial concern when this design was created, the design has definitely impacted fashion in a major way for decades.

From its appearance in classic movies such as Casablanca to more modern day spy movies, the trench has taken center stage and dominated every scene. If you want a style that is safe, you can always go with a trench. You can dress it down or up effortlessly. This is one garment that has placed its stamp indelibly on the fashion world.

Megan Barnes researches historic fashion. She enjoys tracking the origins and trends of particular pieces on style and fashion blogs.

Shop Pencil Skirts, Over the Knee Boots, Speakers, Sports Bras and more. Get this widget.