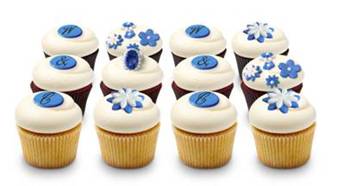 Even if you can’t watch the Royal Wedding in person, you can still add a touch of elegance (and deliciousness) to your evening or any other day, for that matter! The Royal Wedding Dozen consists of 4 Red Velvet, 4 Vanilla Squared, and 4 Chocolate and Vanilla cupcakes decorated with royal blue fondant W & C initials, flowers, and Kate’s sapphire engagement ring. Not to mention that they are super duper scrumptious!

We received a dozen of these delicious cupcakes to try out and enjoy while our house watched the Royal Wedding. What a treat! 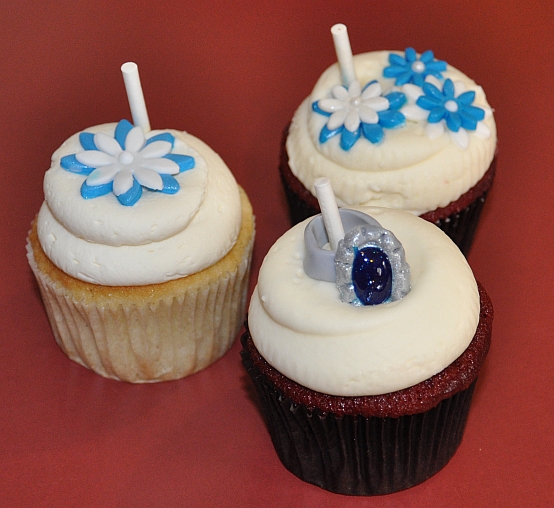 Are ya hungry now?! Don’t they look delicious?!!!

See how owners and sisters of Georgetown Cupcake, Sophie LaMontagne and Katherine Kallinis, would cater the royal wedding if they had been given the chance!

“If we could cater the royal wedding, we would create a 10 foot high layered cupcake tower for the wedding reception – with a different flavor for each layer. We would keep the flavors traditional and classic – vanilla with buttercream, chocolate with buttercream, lemon, and English Toffee – but we would decorate each cupcake with ornate piping and fondant designs to make the tower look very regal. We would also do cupcakes in royal blue gift boxes as favors for each guest and decorate them with William and Kate’s monogram!”
–Sophie LaMontagne & Katherine Kallinis (Every Day with Rachael Ray, April 2011 Issue)

Georgetown Cupcake opened on Valentine’s Day 2008. To their surprise, the shop became an overnight sensation and now sells more than 10,000 cupcakes a day.

The featured product for this post was provided to me, at no cost, by the manufacturer or representing PR agency for the sole purpose of product testing and review. Opinions expressed are my own and are not influenced by monetary compensation.