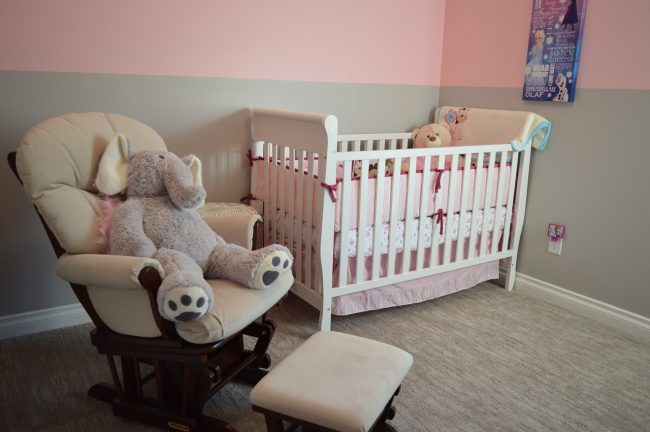 My friends Cole and Alex recently welcomed their first child, Charlotte, into the world. It’s been about a month, and I thought it might be interesting to see what they thought was essential in that first month.

“Furniture,” was the first thing Alex said, as her husband Cole nodded. “We use bottles and toys, sure, but I would die without the furniture.”

With that in mind, let’s look at what they say is essential furniture, and why. 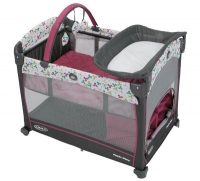 “It was a pain to put together, but the Pack ‘n Play is worth it, even if I’m not likely to pack it up anytime soon,” Cole said. “At least it’s an option.”

The PnP is a portable bassinet/crib combo, and the model Cole and Alex have comes with a diaper changing station. It’s perfect, they said, for changing diapers at 3 a.m. when they don’t want to trek to the nursery changing station. Plus, the option is still there to move the PnP around their bedroom, which can help prevent flat spots on a baby’s head by catching the baby’s attention on different sides and angles. With the PnP on the opposite side of the room, for example, the baby will be forced to look in a new direction to track their parents.

It’s smaller than a full-size crib, so newborns will outgrow the PnP faster than a traditional crib but slower just a bassinet, and it satisfies the four elements of baby furniture. It’s approved for safe sleeping, is comfortable for little ones, has utility as both a crib and bassinet, plus mini changing station, and is designed with mesh sides so your baby is aware of their surroundings. 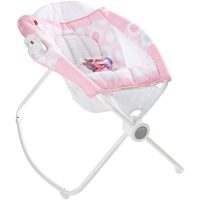 Alex is a high school English teacher, and currently on summer break. “The Rock ‘n Play is what I use when I’m at the kitchen table, working on lesson plans,” she said.

It’s not approved for overnight sleeping (though Alex said she’s used it as such) by the American Academy of Pediatrics, but many people online have also used the RnP as a sleeping solution for their newborns. Check with your pediatrician. Alex recently switched back to the PnP for nighttime sleep as it helps fight against flat head syndrome.

The cozy, inclined RnP can also help babies that have reflux, and Alex said she can gently rock it with her foot while working on her laptop. 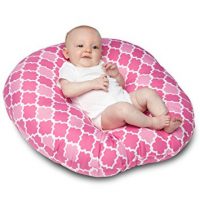 While Alex uses the RnP when Charlotte is asleep, she uses a Boppy Lounger for awake time. “It’s more portable than the Rock ‘n Play, and I can put it on our bed, or even just in my lap,” Alex said.

She added that it’s impractical for her to carry Charlotte the entire time she’s awake — though as a former nanny, she’s adept in holding babies and doing work one-handed — which is where the lounger comes into play.

The Boppy lounger is angled, though not quite as much as the RnP, and has a recess in the middle. It’s made of soft material, making it very comfortable for newborns. It’s super portable with a carrying handle, and not as awkward to hold as the folded RnP.

The downside is there is no slipcover. It’s still easy to clean and is machine washable, but it’s not a quick clean. It’s also only for babies up to 16lbs, so it could be outgrown rather quickly.

But until then, it’s perfect for a lounging baby when you need both hands to cook or do chores. 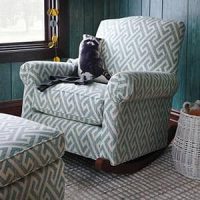 “When it’s 3 a.m. and Alex has just finished breastfeeding, I take Charlotte to the glider and try to get her to fall asleep,” Cole said. “It’s worked pretty well so far.”

Having surpassed rockers as the go-to chair for getting a baby to sleep, gliders often come with an ottoman that glides back and forth in sync with the chair.

Alex said she wasn’t sure what model they had, as she got it used off of Craigslist, but it came with an ottoman and armrests. Gliders can get expensive, they noted, which is why they went with a used set, but helped their budget in other areas, like diapers.

“The armrests definitely help when I’m breastfeeding in the middle of the night,” she said. “Though sometimes I could take or leave the ottoman. Your mileage might vary with it,” she added with a shrug.

Charlotte is only a little over a month old, so it will be interesting to see if they continue to use the same pieces of furniture. They’ve already gone through three different types of swaddles, Alex said, as Charlotte changes her mind on what is comfortable.

What are your essential pieces of furniture for newborns and beyond? Leave a comment below!

Previous Post: « Give Your Garden an Elegant Touch With a Water Feature
Next Post: How to Get Wavy Hair Using Your Flat Iron »