0shares
MUCH ADO ABOUT A MUTE SWAN: Part 9
“So How Do You Write an Effective Personal Ad for a Geriatric Mute Swan?”

Wanted: Well-aged gentleman seeks lonely hearted-lady with similar interests and tastes in life. You must love fresh flowers which I will present to you at regular intervals– especially in Spring when the lily pads are in full bloom. You must love long strolls on the lake, and have impeccable grooming habits. I especially appreciate a lady who had a round, full tail of feathers and who loves to wag them often and enthusiastically. Also, you must not be allergic to cat-tails, as my current dwelling is comprised thereof. Being over the age of 18 is also a plus, since I appreciate a lady with maturity. Signed, Your Lonely Prince-Charming-To-Be.

Remember the two young female mute swans we had lined up for Prince? The girls who were in a small apartment complex lake. Well, those two girls were young– less than a year old to be exact– and their wings weren’t clipped. They decided to ‘fly’ the proverbial ‘coop’ and they left the lake, never to be seen again.

Fish and Wildlife had re-evaluated Prince’s case, and deciding he wasn’t a threat to the environment, or the ducks, or small children, or anything else, and they decided to let him stay on our lake. After, all the only thing the amorous Prince was a ‘threat’ to was un-suspecting ladies like myself who he decided to woo with lake flowers and cat-tails. He wasn’t a picky male, since he was willing to woo a human like me, if a swan wasn’t available. Prince was lonely and he needed an outlet for his amorous feelings, even if his outlet was a 5’6″, 37-year old human female, like myself. Not only was he amenable to my height, my weight and age, he was willing to over-look the fact that I possessed no tail full of feathers, or that I wasn’t even a bird.

Prince was getting lonely and the search was back on for more suitable females within the state. It turns out that Ricky and Lucy, the swan parents of the two young girls who flew the coop, were back nesting and waiting for a new batch of cygnets to hatch.

Bill, my neighbor, jumped at the opportunity and started working with Fish and Wildlife again to get permission to purchase and transport another swan– the swans that would hatch in less than 30-days. In Bill’s letter to F&W, he clearly stated that our HOA would pay for the clipping of the wings and also for the physical alteration of the female swan so that we wouldn’t have a breeding pair.

Having a breeding pair of swans had become more than taboo at that point, since the state of Washington was trying to get rid of ALL mute swans. Oregon had already done something similar, and California was following close in step. The issue was these states wanted the native Trumpeter swan to re-establish territory and they were afraid mute swans would be competition for resources. No mind that humans were quickly building homes on wetland habitats that these swans would normally inhabit. I saw it more as a human problem for trumpeters to re-establish than a mute swan problem. How, after all, was a trumpeter swan supposed to re-establish if humans took away all of it’s habit? It was not likely, but the state, instead of blaming humans, decided to target the mute swan as the scape-goat for Trumpeter’s not re-establishing their homes in our state.

So, Bill was brave enough to take-on the red-tape of bureaucracy and start writing letters to the powers that be so that we could obtain another mate for Prince.

Meanwhile, my neighbor Glenda and I were very worried about the swan’s spirits, so we took turns with feedings. She fed him faithfully at 8am every morning, and spent quality time with him. And, I fed him in the late afternoon. Prince became quite a Romeo and started warming up to both of us. He had wing-dances for Glenda early in the morning. And, for me, he had freshly plucked cat-tails in the evening. Glenda and I mused that he was the only male we knew who was happy to see us, even if we were wearing a bathrobe and curlers, sans make-up.

Yup, Prince was quite a catch. 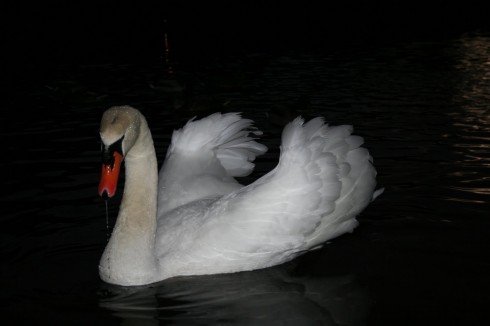 Bill started to make in-roads with Fish and Wildlife, and they soon gave us the impression that they would allow us to take up to three new-born cygnets on to the lake. Bill asked me if I would build housing for them and be their caretakers until they got used to the lake. I was pregnant with my second son at the time and Mommy Hormones were coursing through my veins. Of course, I would build a house, and a nest, and everything else, and probably cuddle these babies too, once they arrived. I was happier than a clam. I was even picking out baby blankets for these new cygnets. Yes, Mommy Hormones will mess with your mind!!

But, we still had about 30 days before these babies hatched, and I bided my time, researching how to build appropriate shelter and care for new baby swans that would soon be mine.