0shares
MUCH ADO ABOUT A MUTE SWAN: Part 5
“Some Day My Prince Will Come.” 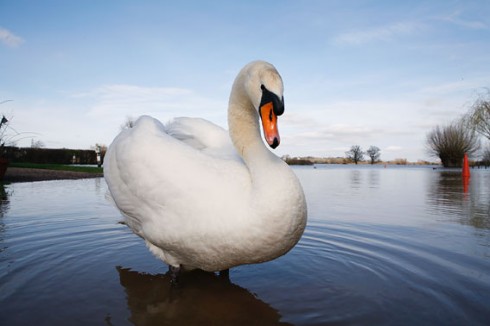 It was a cold Saturday morning and frost had formed on the raw branches of my Japanese maple trees. The small lake was perfectly still as the lone male swan silently parted the water and created a beautiful wake in his path. I grabbed some bread to see if I could coax him to the dock for a feeding.

He saw me and turned course towards the dock. He swam with a furious intent that disturbed the water and the lake was no longer a peaceful scene in the biting morning air. The eerie stillness had been broken. He puffed up his wings and his neck and swam back and forth, back and forth, in front of my feet, evening me wearily. Finally, he stuck his long neck out, and started biting my black boots, and then frightened by his own audacity, quickly retreated, and started swimming back and forth again with puffed feathers. I offered him a piece of wheat bread and softly said, “Hi, I am sorry about your girl, I miss her too.” He eyed me and then the bread, and then swam off, without even taking a bite.

Somehow his grief had turned to anger. This was fascinating to watch because I had read that some birds had a depth and range of emotions, but I had never seen it first-hand. I had no scientific background and could only intuit what I was seeing. The swan swam to the other side of the lake. I called out to him with a trilling sound, but he swam behind some reeds. I went back to my house because he was obviously snubbing me. I think the art of snubbing is universal, whether you are a human or animal.

This male swan no doubt saw me as ‘the other man’, who his Princess spent her last days with. From his point of view, she went across the street one last time, and was returned, by one of those hairy creatures that walks on two legs, and she was dead. I felt like I needed to somehow make his situation right.

I returned later that afternoon with more bread. He saw me from across the lake, and I made a trilling sound to call him again. He arrived at the dock, and puffed up even bigger this time. Later I would learn this posture was called ‘busking’ and swans do it to look threatening and establish territory. I threw some bread into the water and said, “Here you go, Prince. Although you are certainly no Prince Charming”. He eyed me again and started nibbling at the bread. He watched me in his periphery to make sure I didn’t make any sudden moves. I threw some more bread and he ate some more, still very suspicious and untrusting. And then he turned up his tail and left again. I was double-snubbed.

That afternoon, I was determined to make friends with this swan whether he liked it or not. He was now the only swan on the lake, and, I missed Princess. I figured that Grumpy Swan with no social skills was better than no swan at all. He certainly wouldn’t be a replacement for Princess, but he and I would have to learn to like each other. I went out there every day for the next week, and he came a little closer each time and he ate a little more each time.

The next I decided to go sit on the dock alone and start singing Christmas songs. I can be alone there, away from the noisy house, and get inspired by the beauty of the lake. I didn’t have bread. But the swan must have heard me singing, because he came charging out of some nearby reeds. His wings were clipped, so he couldn’t fly, but nonetheless, he lifted those wings and practically ran across the water. He made such a splash in front of me that he soaked my pants. Someone had their feathers in a bunch. I stopped singing.

I looked at him and he was ready to stare me down. I sat there, stone still, and just stared back, and all was silent. He wasn’t going to blink or break my gaze, and I wasn’t blinking either. I said, “You’re pretty good at that. For a swan, and all. Okay, you win”. And then I started singing again.

I had a Michael W. Smith tune in my head now and I closed my eyes. I sang in a low, soft voice, “Alleluja….Alleluja… Holy…Holy… Oh Lord, God, Almighty…Worthy is the Lamb, Worthy is the Lamb … Amen…” I slowly opened my eyes. Prince sat in front of me, perfectly still, bowing his head, with his eyes closed. He slowly opened his eyes, and then closed them tightly, and he bowed his head even deeper. I started singing again, “Alleluja…. Alleluja….” and I just repeated that phrase softly over and over again. This time I watched Prince, and he fell into a trance-like state, opening and shutting his eyes, bowing his head into an S-curve, sitting perfectly still in front of me.

I knelt down on the dock, still singing, and got within 6 inches of Prince’s beak. He didn’t even notice me as he squeezed his eyes tightly shut and held them closed. He listened intently to the singing, wings folded softly on his back. I don’t know how long I sang, maybe a half an hour or so. I simply couldn’t believe that music had soothed this savage beast.

When I stopped singing, Prince resumed his posturing and started fluffing his wings again and looking irritated. He swam away and that was my cue to go home. I couldn’t wait to tell my husband what happened. When I did, he got a smirk on his face, and he made the obvious joke about my singing. I said, “I am telling you, this swan was bowing at my feet and he let me come near his face without flinching”. Fine. My husband didn’t buy it. I went online and found some vets in Florida called The Regal Swan that specialize in caring for mute swans. I wrote them an email about what I had experienced and asked what I meant. (I am a typical woman, over-analyzing every interaction with anyone or anything). I got an email back that was rather puzzled in tone. They explained that mute swans are NOT friendly birds, and that even their feeders and handlers had to be cautious of them.

On a bad day, a mute swan has enough power in his wing to break a grown man’s leg, and the swan will do it if he feels his territory is threatened. On a good day, the swan may only nip and peck at clothing. But sometimes, swans have been known to ‘accept’ their human feeders, and they show acceptance by doing head bows and occasional nods. They whimsically ended the email with, “Congratulations, your swan LIKES you!”

I went back to my husband and announced that the swan liked me, so there! The swan had accepted me into his inner circle. I felt so special. :-)

And I know what you’re thinking, this is going to be yet another ‘me and my pet’ story that no one else finds interesting except the author herself. Bleah. That couldn’t be farther from the truth. Little did I know that Prince and I were to have a long friendship ahead of us, and that Prince would become the subject of a new bill in our state legislature, that I would end up testifying before the senate (and making a fool of myself), that this story would eventually be covered by several newspapers, our local TV station and NPR….

But, I am not going to tell you about all that yet. There’s still a lot to say about the events leading up to the media fiasco.