There’s a reasonable chance you’re one of the millions of people who stood in line for The Twilight Saga: Eclipse this weekend.  I haven’t been yet, but that’s just because I’m still in the process of wearing down my husband’s resistance. My best hope of enticing him is the 21+ screenings at our nearby theatre, where he can sip cocktails without being surrounded by swooning teenaged girls.

I actually have very mixed feelings about the Twilight saga, though.  I certainly find it enjoyable, but it’s a guilty pleasure at best.  And considering how many young women look up to Bella, I’m uncomfortable with her dependence on Edward.  All that suicidal carrying on because he broke up with her in New Moon was a bit much.

But there’s one bit of the Twilight-verse I can unabashedly praise: the fashions the men were sporting at Eclipse‘s LA premiere. 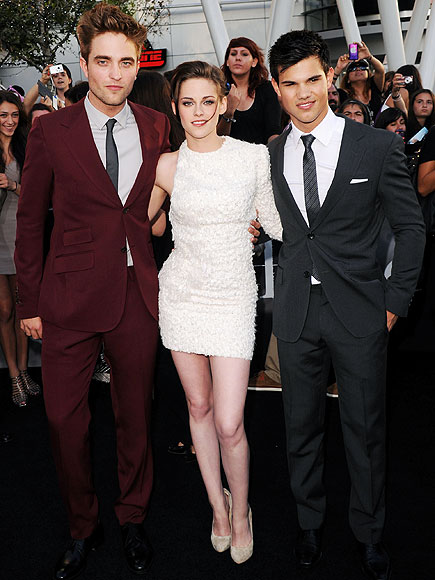 Let’s not talk about Kristen Stewart’s Elie Saab minidress.  It’s a mistake, just like one-sleeved garments are always a mistake, but I’ve had similar missteps.  Just look at the guys!  They’re both in timeless two-button suits and slim ties that would be at home in the Kennedy era, and I love how the silhouette is interpreted in such a body-conscious, modern way.

Robert Pattinson’s maroon is not for everyone, but I think it works for him.  And Taylor Lautner is absolutely impeccable.  He’s projecting more grace and class than many stars twice his age.  (Unfortunately, I’m clearly turning into an old lady, because my first thought on seeing him was “His mama must be so proud.”  Sigh.)

My husband and I are part of a casual generation and we live in a casual part of the country, so he goes weeks without wearing a suit.  I’m wondering now about trying this slim suit, skinny tie look on him.  It’s limiting in a way since you can’t add too much color or pattern in the tie.  (Cary Grant-esque polka dots, for one, are not an option.)  But I find it really handsome, fresh, and modern.

What do you think?  Does your husband/ bf wear suits often?  If so, what kind does he typically wear?  And are you ever involved in that decision?

Lucie Amberg is also a contributor to Powder Room Graffiti.