I try to be refined and modest on this blog as much as possible, but I gotta warn you… it’s hard to talk about sexy men’s underwear in polite company. So if you’re polite and you don’t want the hubs wearing sexy undies, you can skip this post. For ladies that want a little treat, read on!

The king of men’s underwear has expanded his empire to include the brand new Show-It Technology 2.0 underwear line. This line of frontal enhancing underwear emphasizes and flaunts what every man has in his pants. 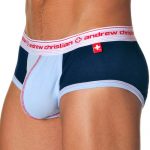 Show-It Technology 2.0 features a hidden “comfy cup” that gently lifts and presents the package to the front. The horseshoe shaped inner cup is lined by soft elastic that gently aids in the lifting and adds up to 1.5 inches to a man’s frontal measurement; it provides the biggest enhancement of any underwear on the market currently. Best of all there is no embarrassing padding or straps and has a completely invisible support structure. The pouch fabric is contrasted to the rest of the underwear to draw the eyes and attention to the “package.” The underwear also features the custom Andrew Christian Anti-muffin Top Elastic to slim the appearance of love handles. The line consists of boxer-briefs, briefs, jocks and swimwear.

“When I realized how popular my Flashback butt lifting boxer and briefs were, I began to think about how to best enhance the front of a man,” says designer Andrew Christian, “taking a look at other underwear on the market that say they enhance, I tried all of these designs and they were uncomfortable and most didn’t work or had other major flaws. I decided to design a line of super comfortable underwear that actually ‘Show’s It’ and developed the this line of underwear and swimwear with Show-It Technology 2.0.”

So naturally, I had to get a pair of these delicious boxer briefs for my man. And to spare you the horror of detail, I’ll just say this… WOW!

Somebody is going to get lucky tonight…

Buy them on www.andrewchristianshop.com for $24 – $26 (They are also available as swimming trunks if you dare…)

Just in case you missed it, be sure to read our exclusive interview with Andrew Christian.