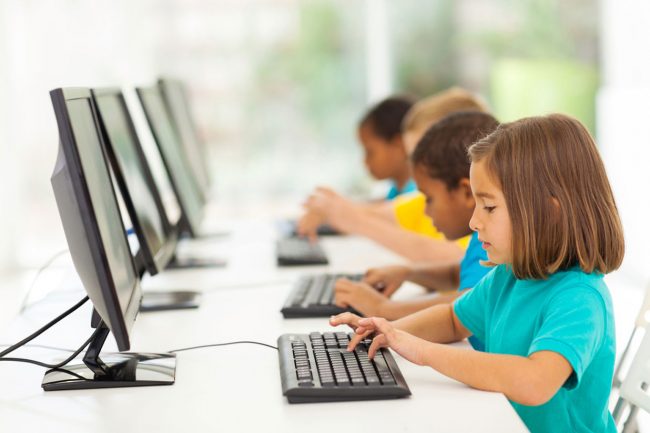 Children should not be kept off of the internet. There are many dangers on there, it’s true, but there is also a collection of knowledge the size of which has never been seen, in fact the internet pretty much holds the entirety of human understanding of our universe and its peoples. The internet is the future, whether you want to admit it or not, and so the young need to allowed to embrace it so they can use the knowledge to build themselves a better tomorrow.

The first thing you should teach children about the internet is that there is a lot of mis-information and lies. Children need to be taught about credibility and accurate sources, otherwise we will have a generation who believe every nut job with a computer who states the world is being run by the evil Illuminati.

There is an incredible amount of learning games on the internet that are not only fun, but educational and/or teach children basic things like typing and music. These games are a great source for children who have started school and whilst they are playing these games, they are less likely to be playing games that might not be suitable for younger audiences; or watching TV for hours on end.

Contrary to what people may have thought a century ago, religion is actually becoming more prevalent. Not in the numbers of people who are becoming religious as that is still declining, however it’s the power that the religions hold to shape society and its events. The only hope for a better world is in the peaceful coexistence of religions and the only way to achieve this is to educate children on the different cultures and religions of the world.

We all know about Ted talks by now, but there are many talks on here that are great for kids to watch as well. Ted talks cover such a wealth of topics and it means that children can learn about these without having to read anything which might either be difficult for them, or they might just hate reading and lose concentration easily.

I was a young teenager when Google Earth first came out and I spent hours of my time searching the world. It allows kids to see what other places look like and learn about the geography of other lands. If you stay with your kids whilst they explore the globe, you can help them learn about the different cultures of the world as they see them with their own eyes (or those of a Google car).  It’s like travelling the world without actually having to spend any money, so a win-win

Whether or not you follow my advice, as long as your children are using their internet time for something useful and not just watching ‘funny’ videos on YouTube, they’ll be doing themselves some good and will have taken the first step to becoming a successful person who will influences the world in unimaginable ways.

Previous Post: « Post-Whitening Wisdoms: Tips to Keep Your Teeth Bright
Next Post: How To Wear Pantone’s Colors Of The Year »