Join my newsletter list to be the first to hear our latest news! Learn More 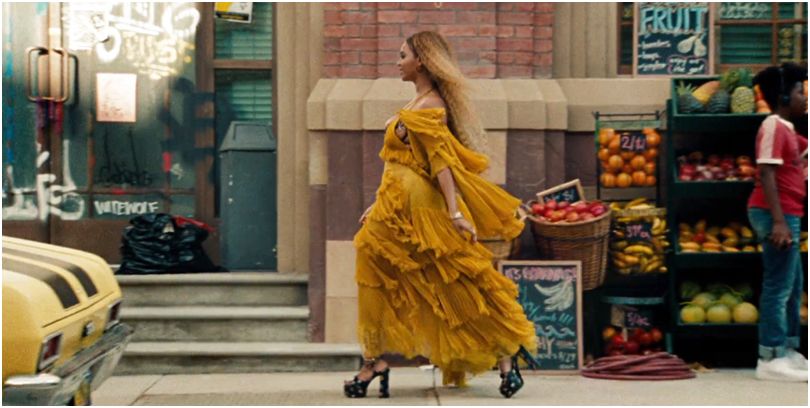 In no surprise to anyone, Queen Bey’s visual album has taken over the world. Acclaimed by critics and viewers alike, the musical special is absolutely Beyonce’s most artful, most dramatic, most eye-catching work yet, and everyone who’s seen it wants to be a part of it.

To help you get one step closer to starring in “Lemonade,” here are the Queen’s most memorable looks from the film and how you can recreate them on the cheap.

‘Pray You Can Catch Me’

The first look of the visual album perfectly embodies the feelings of despair and distrust encapsulated in Beyonce’s song. Wrapped in a black hoodie zipped tight over a long, black skirt, Bey looks fashionably inconsolable. Fortunately, you can strike the same style on your down days relatively easily.

Most women already have a cozy black zip-up and a nude cami that will do the trick (and if you don’t, you can find all your women’s clothing basics here). The bohemian-style skirt Bey is rocking has been out of style since the mid-‘00s, but a few stores still stock the style. We found options at Urban Outfitters and MayKool.

The flowing yellow Roberto Cavalli dress Bey flaunts while blissfully destroying the neighborhood is undoubtedly one of the most iconic looks of the entire album. The layers move artfully while she swings her baseball bat and grins wildly at passers-by.

Obviously, obtaining your own dress from the Italian fashion designer is going to set you back a few thousand dollars. For a daily outfit inspired by Bey’s dress, you might opt for a simpler golden-yellow maxi dress with ruffles or rouching; the ever-Boho-chic Rachel Zoe has a couple of options that are slightly more affordable than Roberto Cavalli. While putting your look together, don’t forget the black bra that peaks through Bey’s dress’s cutouts while she savages car windows and fire hydrants. 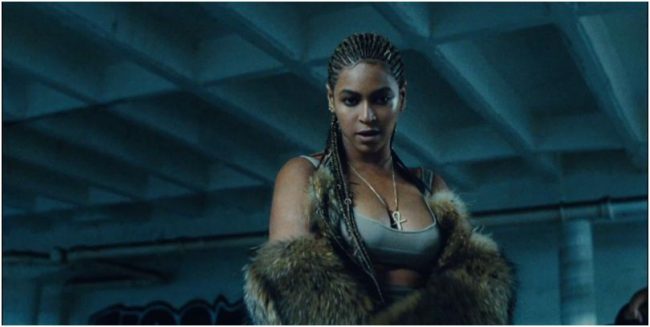 In an album filled with fury and spite, this track played during the “Anger” chapter of the film is probably the angriest. Beyonce united with Jack White to create rock and roll magic. It makes sense, then, that Bey’s ensemble is signature street: a fluffy fur coat and camel crop top and leggings (by Hood by Air and Yeezy, respectfully).

There is plenty wrong with owning a fur coat ? from the questionable ethics to the untenable price tags but even faux fur can cost a pretty penny. If you are lucky, you will find a reasonable facsimile at your local thrift shop or eBay. You can probably find nude leggings and bandeaus in stores like Jimmy Jazz or Forever 21, but for an outfit with more coverage, you could try this combo from Elphina.

Most fashion experts are raving about Yousef Al-Jasmi’s beautiful black bodysuit featured in this song, but Beyonce has another outfit that you might find easier to wear in the real world. In scenes on the bus and outside, Bey boasts a structured pantsuit in an African-inspired print. Beneath the overlarge jacket, you can see a simple black crop top.

As yet, the outfitters have not jumped on the concept of bright and busy patterns for women’s pantsuits, but you can probably get away with a jumpsuit, a black bra, and some serious statement jewelry. However, you absolutely cannot forget the long, tight braids, which complete Bey’s look. 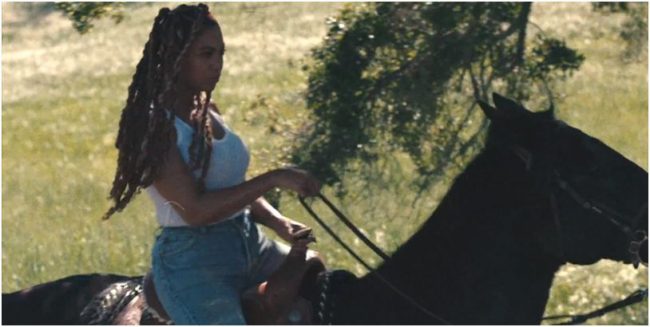 This heartwarming song about the relationship between a father and daughter is empowering and full of love, and it introduces the dress that Beyonce wears on and off for the rest of the album. With puffy sleeves that would not have been out-of-place at an ‘80s wedding and a swirling beaded bodice so tight it could have come straight from the 19th century, the dress is both imposing and delicate but you aren’t likely to find anything like it in stores.

However, this song does have an outfit so replicable you probably already own all its parts. Rocking long dreads and riding a horse, Queen Bey looks stunning in a white tank top tucked into light wash high-rise jeans. Pair these with the ubiquitous black bra found underneath most of the film’s looks and you have a simple and obvious tribute to 2016’s best album.

All images screenshot from HBO

We are HUGE fans of Bluey over here. Can you tell?

How are you keeping the air in your home clean? If

Forgot to post this yesterday! The one where it’

Happy #NationalTortillaChipDay! 🎉🥑 We are ea

It’s not too late to grab some cute leather boot

Ready for a new week of fun playtime! Spring is co

Happily playing with his Grapat Nins and his Grimm

Spice things up for Valentine’s Day with Spicy C

We are HUGE fans of Bluey over here. Can you tell?

How are you keeping the air in your home clean? If

Forgot to post this yesterday! The one where it’

Happy #NationalTortillaChipDay! 🎉🥑 We are ea

It’s not too late to grab some cute leather boot

Ready for a new week of fun playtime! Spring is co

Happily playing with his Grapat Nins and his Grimm