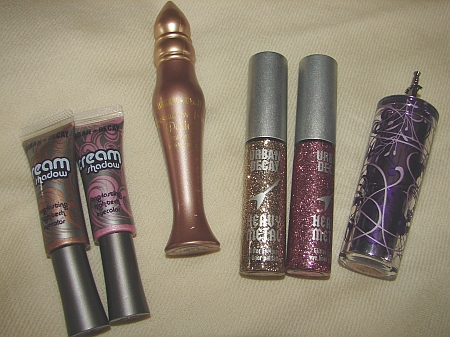 never fails to impress me and this time was no exception.

My favorite picks from the Spring 2009 Line are: 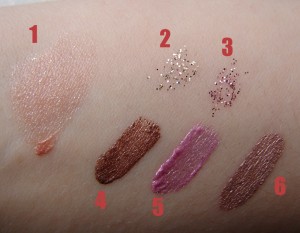 This color is great for everyday wear and I highly recommend it for Spring. It’s a light color, only a shade darker than my natural lip color, which makes it look totally pure and natural. I love the subtle glitter in it as well that catches the light and makes lips look luscious. I love their lipstick because it goes on smooth, doesn’t dry out lips, and tastes and smells heavenly. You’ll have a hard time not licking this stuff off your lips… My other favorite shade is Indecent

This eye liner is really cool and I’ve never used anything like it before. The brush is similar to that of RapidLash Eyelash Renewal Serum

. It’s a gel formula with glitter that goes on easily and looks fabulous! Of course I wouldn’t wear something this flashy everyday, but I’m sure a lot of women could! For me, it’ll be a special occasion or nighttime. Maybe I’ll wear it on my birthday too! (It’s in 2 weeks!)

This shadow is smooth and goes on easily providing rich, bold color with a crease-less formula. (In spite of the long wearing formula, I still recommend applying a layer of Urban Decay Eyeshadow Primer Potion

for good measure.) The site description says “Once the cream dries down, it feels as light and flexible as your own skin!” but I did find that for the first hour, I was very aware this it was on my eyelids. It seemed to tighten the skin almost… Not a bad thing, just something I’m not used to since I rarely use cream shadows. They usually crease within minutes and slide off completely before an hour is up. What’s the point? So I was actually kinda excited to try Urban Decay Cream Shadow Eyecolor

to see if it worked better than the other cream eyeshadows I tried. Luckily, it did!

and Suburbia, a goldish tan color

because I am more likely to wear neutrals rather than cool, bright colors.

The new primer potion is only the most wonderful invention in makeup history, second only to the original Urban Decay Eyeshadow Primer Potion Eyeshadow Base

. It’s just like the eyeshadow base you love, but now with a beige tint and with shimmer. Because of it’s perfect color, it goes well with almost any eyeshadow palette. So far, i haven’t found anything it doesn’t look good with. It’s super staying power holds any eyeshadow on to your lids till you decide to take it off.

After taking the picture above with the swatches above, I washed my arm off with a washcloth and everything except the Primer Potion in Sin

came off pretty easily. I had to get out the Make-Up Remover

to get it off. For me, that’s great news because I know it stays on till I want it to come off! I higly recommend Urban Decay Eyeshadow Primer Potion in Sin

. If you don’t get anything else I mentioned above, at least get that. You won’t be disappointed!