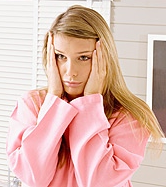 Have you ever looked in the mirror and noticed worry lines that were not on your face yesterday? As the economy takes a toll on our wallets, it’s easy to feel anxious and stressed about the state of our finances. It’s likely the current state of our economy is causing signs of pre-mature aging in the forms of unwanted fine lines and wrinkles!

According to a 2005 study conducted at the University of California, San Francisco, cells age much faster than they normally would if they were not under high amounts of stress. Far too many of us are speeding up our aging clocks by sweating over the current recession. However, there is good news for all who are experiencing signs of pre-mature aging in these sticky times. According to Ron Cummings, founder of AminoGenisis Skin care, there are several preventative and corrective stress measures people can take that won’t put a hole in their wallets.

Here are some tips to help you stay on track:

Don’t let sleep land at the bottom of your to-do list in times of stress. All three stages of sleep dissolve free radicals, which are notorious for their contribution to early aging. More specifically, the second stage of sleep is when hormone levels peak and cell repair takes place. Any damage to your skin that could be contributing to pre-mature aging is repaired during this stage. Try to get about 7 to 8 hours of sleep each night.

When people are stressed, they often reach for cigarettes or alcohol to release their anxieties. However, smoking uses up vitamin C in the body, which is usually used to preserve collagen in the skin, the substance that keeps skin plump and youthful. Smoking breaks down the collagen, causing pre-mature wrinkles around the eyes and mouth. Heavy drinking enlarges the blood vessels and capillaries in the skin, which can lead to a loss of healthy glow in the face.

After a long, stressful day, it is likely that removing make-up and thoroughly cleansing the face seems to have little importance. However, not doing so not only leads to mascara stained sheets, but also to clogged pores and accelerated signs of aging. According to Ron, “at the very least wash your face every night to remove imbedded dirt, make-up, and other impurities accumulated throughout the day.”

Daily use of an anti-aging day cream containing SPF can help reduce signs of fine lines, wrinkles, and sun-damage, as well as prevent future damage. A great option is AminoGenisis’ newest product, “Wrinkle Arrest,” which is an anti-aging day cream with SPF 18 and broad spectrum UVA/UVB protection. Wrinkle Arrest has also been recognized by the American Academy of Dermatology with a seal of recognition for its sun-protection benefit.

About AminoGenesis Skin Care
AminoGenesis Skin Care was founded in 2000 after creator Ron Cummings, a longtime sufferer of dermatitis, was recommended a cream for his skin condition. Once he learned everything he could about that cream he used, Ron decided to make the life-changing decision to end his existing career and enter the unfamiliar business of skincare. He learned that the cream was actually a potent mixture of amino acids, essentially the building blocks of all life. All living things, plant or animal, that grows on this planet share exactly the same amino acids – it is the arrangement of amino acids that makes everything and everyone unique. They are the building blocks of every structure in human skin; vital skin proteins like collagen, elastin, lipids and all cellular tissues are made from amino acids. The basis of the AminoGenesis philosophy is that skin functions fantastically when it is properly nourished and it is with amino acids that skin becomes properly nourished. Several years ago the team of world class doctors, chemists and researchers that Ron enlisted set out to harness the power of amino acids. After about a decade of research and testing, the original AminoGenesis formula was born and the results astounded even those who created it.