4 shares
LET YOUR HAIR COLOR DO THE TALKING 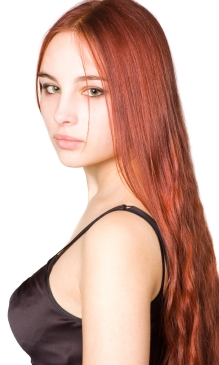 January 2007, Stamford, CT – Would a blonde or a brunette appear more presidential? Would you sooner trust a brown- or blonde-haired surgeon? Would a redhead make a loyal employee?

The Clairol haircolor team recently posed these and other questions to over 1,000 women (ages 18 plus) nationwide to gauge the influence of hair color on personality perceptions. The results show that blondes are overwhelmingly perceived as fun and flirty, brunettes as smart and serious and redheads as strong.

“Hair color is more than just an element of outward appearance – every shade has a distinct personality,” explains Brad Johns, celebrity colorist and Global Color Director for Clairol. “When a woman colors her hair, she is choosing not only a particular shade but the attitude and image that go with it.”

Specific findings for the Clairol survey include:

THE COLOR OF POLITICS:

§ Looking for that “in” for your next interview? Seventy-six percent of women believe brunette is the best hair color for making a good impression on an interview. Blonde came in second (12 percent) and red last (three percent).

§ Sex appeal…Flirty blonde icons clearly still hold influence, as more than half of women polled said blonde is the hair color men find sexiest on a woman. Half of women surveyed also chose blonde as the most seductive hair color.

§ Blondes still have more fun…More than half of women surveyed reported that they believe blonde is the most fun-loving hair color.

§ Seriously speaking…More than three quarters of women surveyed said they associate brunettes with being the most serious. Fifty-six percent also reported that brunette signals the most confidence.

§ They mean business…Redheads were voted most intimidating by half of respondents.

§ If only for a day…The majority of women surveyed said that if they could change their hair color for a day, they would choose to go red.

This website uses cookies to improve your experience while you navigate through the website. Out of these, the cookies that are categorized as necessary are stored on your browser as they are essential for the working of basic functionalities of the website. We also use third-party cookies that help us analyze and understand how you use this website. These cookies will be stored in your browser only with your consent. You also have the option to opt-out of these cookies. But opting out of some of these cookies may affect your browsing experience.
Necessary Always Enabled
Necessary cookies are absolutely essential for the website to function properly. This category only includes cookies that ensures basic functionalities and security features of the website. These cookies do not store any personal information.
Non-necessary
Any cookies that may not be particularly necessary for the website to function and is used specifically to collect user personal data via analytics, ads, other embedded contents are termed as non-necessary cookies. It is mandatory to procure user consent prior to running these cookies on your website.
SAVE & ACCEPT
4 shares