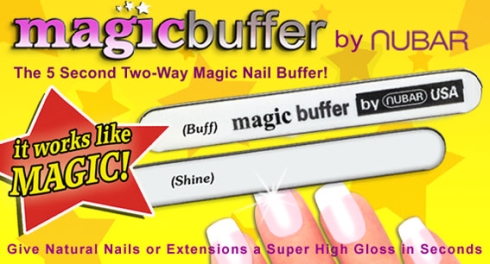 I’ve used so many different nail buffers and most of them work good the first couple times and then it wears out… Plus the shine doesn’t seem to last. The 4 way cube nail buffers aren’t very user friendly… it’s hard to maneuver and usually only gets the top of your nail done. But I was skeptical that a 2 sided nail buffer would work.

I decided to give The Magic Buffer a try on my tired nails and ended up very pleased with the results. It works very quickly… you buff your nails with the printed side for a few seconds, then switch to the other side (labeled “shine”) ti shine your nails. It’s that easy and it you can be done, both hands in less than 3 minutes. 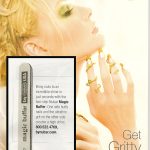 It made my nails so shiny, they looked like I had used a super high gloss clear coat of nail polish on them… except they were smooth too! Just beautiful. I thought about taking a pic of my nails to show you how well it works, but I have short stubby nails right now and didn’t think would be very impressive… hehe

I don’t know why this one works so much better than all the other nail buffers I’ve tried, but for $5.99 you just can’t go wrong. Plus, Magic Buffer was in NAILPRO magazine’s February 2009 issue in the “Get Gritty / Buffers” article.

Purchase the Magic Buffer on ByNubar.com.

Previous Post: « Get 10% Of At Calypso Studios!
Next Post: Enter The Arnold Best in Class Sandwich Challenge »