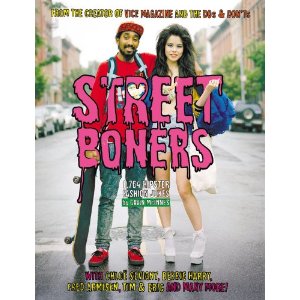 Fifteen years after founding Vice, Gavin McInnes has poured his creative juices into a new endeavor: StreetCarnage.com. Growing in size and influence at an alarming rate, the site’s main feature is the new and improved version of Gavin’s “DOs and DON’Ts,” now tantalizingly called Street Boners.

These Boners have been polished and compounded into a book that takes the best of the site and adds hundreds more gems! With 1,312 photos, hilarious captions, and a harsh new rating system-from one to 10 kitten faces-STREET BONERS makes sure no glorious fashion statement goes unnoticed. Innocent citizens are either damned to hell or relentlessly exalted into heaven. Chloe Sevigny, Debbie Harry, Fred Armisen, and Tim & Eric also contribute their scathing wit to the book, and the end result is a New York fashion bible no bathroom should be without.

I received a copy of this book to review back in April and I didn’t get a chance to read the whole thing, but my husband has been getting a kick out of it! It’s like a car crash… you just can’t look away. Once he read the first few pages and bust a gut laughing at the humor in the book, he just couldn’t stop.

Not for the faint hearted… Be warned, this isn’t family friendly as it does contain come nudity and quite questionable acts of “fashion” that could be interpreted as sexual in nature. Probably not something you want your young kids flipping through. However, it’s absolutely hilarious and would make a great addition to your book collection if you can keep it out of the hands of your kids!

Get ready for 4th of July with red white and blue