This is for all you moms of kids under 3 and moms to be. If you haven’t heard of gDiapers yet, you are in for a treat!

First off, I gave birth to my second child at home, in a birthing tub. My handsome baby boy was born on August 31, 2010 at 2:42am after 5 hours of labor. He is absolutely the cutest little man on the planet and I’m totally smitten… 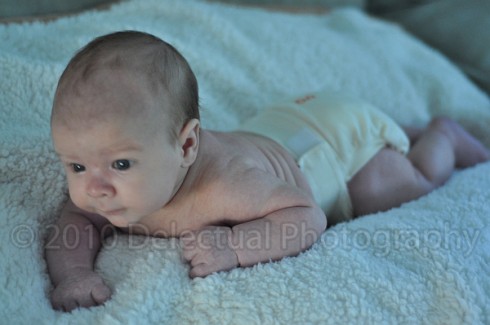 With my first child, I was unable to do cloth diapers for more than a couple weeks because our landlord removed the community washer and dryer suddenly and without warning. Needless to say, we didn’t stay living there much longer. Now we own our own home in the woods and I have my very own Maytag washer and dryer.

So I was actually kinda excited to get a second chance to try my hand at cloth diapering with baby number two. I researched cloth diapers for weeks, trying to find the best ones on the market only to find that there were actually a lot more options just three years later. The most exciting and innovative diapers I found were gDiapers.

gDiapers are actually a diaper hybrid that offers the convenience of switching between washable, reusable cloth inserts and biodegradable, disposable refills. Save money by using gCloth inserts that are made of four thirsty layers of baby soft microfleece and hemp/cotton. No folding required! Just slip them into the gPants and you’re ready to go. Not only are they convenient and earth friendly, they are SUPER cute. 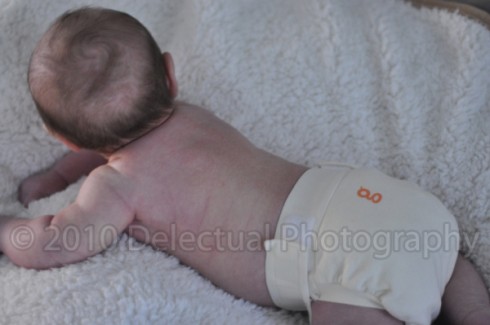 If you’re not into doing that much laundry and you’re looking for something closer to disposables, you’ll want to try the gRefills. gRefills are 100% biodegradable. They can be home composted, flushed or even tossed. Throw the wet ones in your garden compost and in 50 – 150 days you’ve turned a wet diaper into a soil amendment. You’re actually giving something back to the planet and reducing your family’s footprint. Flush and you’re putting poop where it belongs, in the toilet, not the garbage. Even throwing gRefills away is okay. After all, gRefills are plastic free. Even though the degradation rate in landfills is slower than in a home compost, they’ll still break down much quicker than the 500 years it takes a disposable.

I opted to use both gCloth cloth diaper inserts and the gRefills. After 6 weeks of using both, I personally prefer the gRefills. They are easier to deal with since you can flush them or chuck them in the trash and I rarely had problems with leaks. The gCloth is a more affordable option if you’re looking to save money and have time for laundry, but I found I had to change diapers twice as often and some diaper changes also required an outfit change. 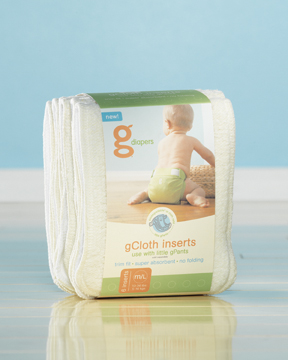 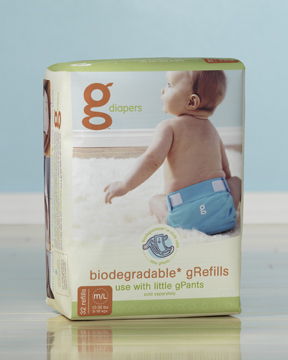 I have only used the gCloth inserts a couple times so I will need to play around with them a little bit more and see how they perform. I’ve been using the gRefills pretty consistently for over 4 weeks now and I’m really happy with them. They are even easy to deal with when out and about.

I do still use Huggies disposables overnight since my little guy sleeps 7 hours straight at night and I don’t want to disturb him with a diaper change. I found that no diaper (disposable or otherwise) is leak-free after 6+ hours… Because gDiapers are plastic free, it makes them a little more prone to nighttime leaks though. At least that’s the case with my little man! Maybe he pees a lot when he sleeps…

Overall, I highly recommend gDiapers if you don’t want to use disposables and are in the market for cloth diapers that are convenient and easy to use, yet still affordable.

You do have to make a little bit of an initial investment with gDiapers. Here is what I personally recommend…

For Newborns Under 8 Pounds:

I recommend getting the gDiapers New Baby Bundle if you have a preemie or baby under 7 pounds. The bundle comes with 12 tiny gPants that you can use the small gCloth inserts or small gRefills in. They are quite small, so if you pop out an 8+ pound baby, you might be better off skipping the New Baby Bundle and just go ahead and get the size small gPants. I also recommend using disposables for the first week or at least the first few days until your new baby has passed all the mecconium.

For Babies Over 8 Pounds:

I’ve found that I need to change diapers more often with the gCloth inserts than the gRefills. And I purchased at least 1 extra liner for every gPant. So I have around 10 gPants and like 22 liners.

My little guy is almost ready for size Medium, so I’ll have to get back to you about how many of those to buy!!

Get gDiapers on Diapers.com

Get gDiapers on Amazon.com